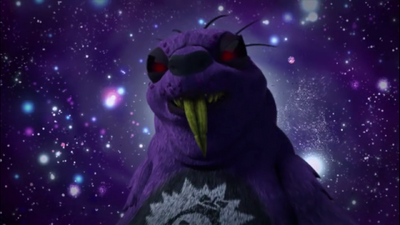 The Dream Beavers were minor antagonists in the 2012 Teenage Mutant Ninja Turtles cartoon series. They are a race of beavers from the "Dream Dimension" who haunted the dreams of a scientist, driving him to never sleep for 40 years.

Age: At least 40 years old, though said to be eons old

Attack Potency: At least Galaxy level (The Dream Beavers have complete control over the Dream Dimension, which contains at least a single galaxy, in its entirety, able to warp the entire world to fit their any desire, such as turning the entire dimension into a comic book, then turning it into a fiery hellhole. Shattered the boundaries between four different dream worlds), possibly far higher (The dimension was described as being an alternate dimension to the "real" dimension, and the Dream Beavers were theorized as being capable of destroying the universe if they were to retain their powers in the real world) | Unknown (Appeared to be virtually powerless in the real world, but retained some of their powers)

Speed: Unknown (Dark Beaver flew to the sun in an unspecified period of time) | Unknown

Stamina: Superhuman (Never tired even after fighting the turtles across space) | Unknown

Intelligence: With the exception of Dave Beaver, the Dream Beavers are depicted as being rather intelligent and understand the of their powers and nature. They were shown to have a mastery over the powers of manipulating dreams and the realities within them and knew the best ways to strike fear into their opponents

Weaknesses: Outside influences can hinder them in dreams, albeit only slightly. Destroying the Obturaculum Somniorum releases them from their dream dimension, thus making them powerless | Unknown

Retrieved from "https://vsbattles.fandom.com/wiki/Dream_Beavers?oldid=5961625"
Community content is available under CC-BY-SA unless otherwise noted.