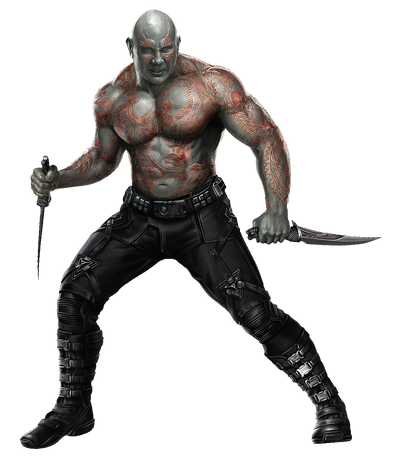 Drax, also known as Drax the Destroyer, is a former intergalactic criminal and a member of the Guardians of the Galaxy. He sought revenge on Ronan the Accuser for killing his wife and daughter, and went on a rampage across the galaxy, ending with him being imprisoned by the Nova Corps in the Kyln. There Drax became uneasy allies with Star-Lord, Gamora, Rocket Raccoon, and Groot. Together they broke out of the Kyln and became embroiled in the Quest for the Orb. After the Battle of Xandar, in which he finally gained the vengeance on Ronan he had so long sought, Drax left Xandar with the other Guardians.

Attack Potency: At least Building level, likely higher (Overpowered Groot in a brawl. Fought against Korath. Held Gamora in a chokehold and pinned her against a wall easily for over a minute while talking to Star-Lord at the same time)

Speed: Massively Hypersonic combat and reaction speed (Can keep up with Groot)

Lifting Strength: At least Class 100 (Comparable to Groot. Should be comparable, if not superior, to the likes of Captain America and Winter Soldier)

Durability: At least Building level (Survived being run over by a spaceship), likely higher (Took hits from Ronan)

Intelligence: Below average. Drax demonstrated many times a severe lack of understanding for metaphors and symbolism. However, he has a good degree of battle experience. Drax has proven to be a brutal, yet accomplished combatant. He was also capable of holding his own and slaying Korath the Pursuer. Drax is also very skilled in using knives, particularly his own dual knives, that he used to take down many Sakaaran soldiers

Weaknesses: He acts impulsively at times