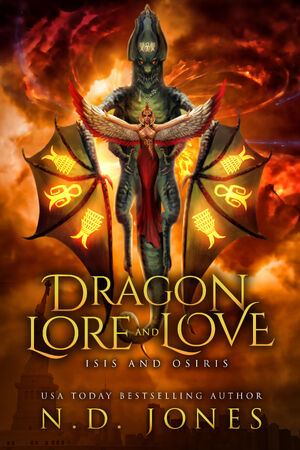 A one shot by paranormal romance author, ND. Jones. The story is based upon the Egyptian tale of Isis and Osiris, retold with various fantastical factors. The most obvious of which being the fact that these Egyptian deities are dragons in this twist on ancient myth. The story begins with Isis being attacked by demons and develops into a fight to reclaim their lost homeland of Nebty.

The verse is decently powerful, with the dragons in their dragon form all around small building level simply by flying at high speeds. Due to the variety of dragons: Time dragons, lightning dragons, rock dragons, poison dragons, shadow dragons, there's a wide variety of abilities. Some of these include enhanced durability, soul manipulation, energy projection, speed amplification, summoning, and sound manipulation.

Human Form: A dragons have the capacity to transform into humans. Though in human form they are past the athletic peak any human could hope to achieve. These forms are used primarily to blend in with human society.

Dragon Form: A dragon's natural form. Towering over buildings and extraordinarily heavy, dragons at at their most comfortable in wide, open spaces where they can spread their wings.

Hybrid Form: These are forms that only the sun and moon dragon, Isis and Nephthys, can adopt. They are humanoid, with wings in a dragon's likeness, though significantly smaller. The two seem able to access all their power in both their hybrid and dragon form.

Nebty: The homeland of the dragons. The human world and the preternatural world are two separate realms. Within Nebty, each preternatural group has a designated place to live.

Kinetic Energy of the Average Dragon's flight (9-A, scales to dragons in their dragon form)

Start a Discussion Discussions about Dragon Lore and Love: Isis and Osiris