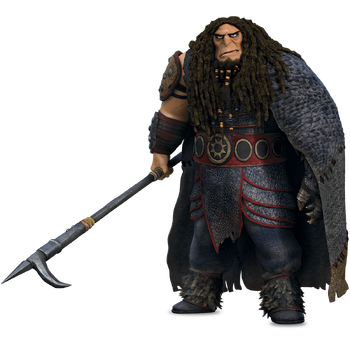 Drago Bludvist claims that as a child, his village was attacked by dragons and his family was killed. He lost his left arm in the attack and constantly lived in fear of another assault by the creatures. Despite his tragedies, he vowed to rise above his fear and conquer the beasts that had hurt him, becoming a tyrannical warlord with a lust for power over all dragons. He then found a Bewilderbeast hatchling in his early conquests, abused it and trained it to be as cruel as him and to control the dragons. With this new power, he wished to conquer all of the world's dragons and with them, conquer the world.

Origin: How To Train Your Dragon 2

Attack Potency: At least City Block level (Managed to take down Toothless. Knocked down Stoick and Valka with one shot, albeit not knocking them out or straight up defeating them)

Speed: Normal Human (Due to his huge bulk, may not be a very fast runner)

Striking Strength: At least City Block Class (Knocked down Valka and Stoick down in one shot, the latter with his bullhook.)

Durability: At least City Block level (Took hits from Stoick the Vast, survived being blasted by Hiccup using Inferno's ZippleBack gas, albeit being sent flying; defended himself from Dragon Fire using his Cape)

Retrieved from "https://vsbattles.fandom.com/wiki/Drago_Bludvist?oldid=6095359"
Community content is available under CC-BY-SA unless otherwise noted.