VS Battles Wiki
Register
Don't have an account?
Sign In
Advertisement
in: Tier 6, Tier 6-A, Characters,
and 29 more

The first of the Seven Warlords to be formally introduced, with his appearance marking their very first mention in the story. Dracule "Hawk-Eyes" Mihawk currently carries the title of the "Strongest Swordsman in the World", wielding the massive black sword Yoru, one of the only twelve "Supreme Grade" swords in existence.

Cold and callous, never interacting with others unless absolutely necessary, he seeks nothing more than a proper duel, often attacking random pirates simply to kill time. His title has made him the envy of all, with many swordsmen, including Roronoa Zoro, seeking to surpass him. It is Zoro's ultimate goal to defeat him, and after seeing his warrior spirit, Mihawk urged Zoro to become stronger and surpass him one day.

So far, it is completely ambiguous if Mihawk has a bounty, but what is known is that he has enough skill to match Shanks in a duel- though this has fallen by the wayside now that Shanks has lost his good arm.

Classification: Human, Former Shichibukai, The Strongest Swordsman in the World

Powers and Abilities: Superhuman Physical Characteristics, Extraordinary Master Swordsman, Enhanced Eyesight, Air Manipulation (Can fire streams of air compressed into a cutting edge with his attacks), Haki (Intermediate Kenbunshoku, Advanced Busoshoku), Acrobatics (Hypermobility; Capable of riding his sword using it's momentum and landing on it's hilt), Information Analysis (He can discern a person's talent when using a sword with just a glance and can see the true strength of those that would stand before him. Capable of sensing the "Breath" of all things, allowing him to know the trajectory of something's movements before it happens as well as it's location despite not being visible to him. By doing so he can determine the speed, power and angle of where he should cut at allowing him to cut objects he wouldn't be able to with strength alone), Analytical Prediction (Through sensing the breath of someone or an object he can know the trajectory of their actions before it happens), Extrasensory Perception (Through sensing the breath of someone or an object he can know their location despite not being visible to him), Damage Boost (Through Goken he is capable of cutting people and objects he normally couldn't with his regular slices), Fear Manipulation (His presence strikes fear into the Humandrils who were unaffected by Zoro's Aura and even mocked him), Attack Reflection (Can deflect and parry attacks casually with his sword), Resistance to Madness Manipulation, Mind Manipulation and Soul Manipulation via Willpower (Through sheer willpower they can resist losing their mind when absorbing shadows through the Kage Kage no Mi. Shadows belonging to strong willed people are difficult to control, allowing them to rebel against Moria's pact which usually immediately submits a shadow to his supremacy and orders. Spiritual energy is contained within one's soul/life; this energy is represented by the fighting power or the Haki itself. Those with strong souls, which are homologous to shadows, resist the effects of Brook's soul manipulation)

Attack Potency: Continent level (He's the strongest swordsman in the world in both name and actuality, and he's currently waiting for a worthy foe who surpasses his old rival Shanks, which makes him superior to the likes of Vista, Old Rayleigh, and Shanks. The databook states that Shanks used to be as strong as him, implying that he isn't any longer)

Speed: FTL (Kept up with Vista)

Lifting Strength: Class T (Superior to Zoro and should be comparable, if not superior to, Shanks)

Striking Strength: Continent Class (Even with one sword arm, it is still that of the World's Strongest Class)

Durability: Continent level (Got through the Paramount war without a scratch to show for it despite clashing with several of Whitebeard’s commanders)

Stamina: Superhuman (Casually toyed with Luffy and did not show the slightest sign of exhaustion throughout the Marineford War, despite clashing with opponents strong enough to threaten the Admirals)

Range: Several meters with Yoru (Its blade is at least seven feet long), At least several kilometers with air slashes (His swings generate enough force to cleave apart icebergs from across Marineford)

Standard Equipment: Kokutō Yoru and his Kogatana (a pendant cross knife worn on his neck)

Intelligence: Combat Genius. At least Above Average normally. Mihawk is famous for being the best swordsman in the world, having displayed master-levels of skill such as deflecting bullets with an absent-minded behavior. He is very calculating and possesses pinpoint accuracy with his strikes, capable of fully stopping Zoro's Oni-giri just by positioning a small blade at the right angle to intercept the three-bladed attack. He is skilled enough to emerge from the battlefield of Marineford without receiving a scratch, let alone receiving a direct hit despite coming to blows with a number of commanders under the Whitebeard crew, showing his impeccable skill as a swords-master. He is among one of the few individuals who has developed a Black-Blade (The other being Ryuma, many years ago), which is a feat that many highly acclaimed swordsmen who possess a mastery of Haki have failed to accomplish, such as Kozuki Oden, who was incapable of evolving his own weapons into Black-Blades.

Weaknesses: Mihawk only uses as much power as he deems necessary and will thus not go all out if his opponent does not impress him.

Black Blade Arc Moon: (Kokuto Kogetsu) Mihawk's swings are able to generate compressed air blades that slice apart the landscape even if the target dodges, throwing them off balance.

Black Blade First Day: (Kokuto Saku) Mihawk lures his opponent in by holding Yoru with two hands behind his back. Should his opponent approach, he meets their attack with a downward slash in hopes of cutting their arms off.

Black Blade One Flash: (Kokuto Issen) Mihawk swings Yoru once, cleaving apart everything in its path. This technique is powerful enough to cleave apart Aokiji's iceberg by accident after missing Luffy.

Black Blade Savage Star: (Kokuto Arahoshi) Mihawk leaps into the air while gripping his sword in a downward position, descending to impale his target with great force.

Earth-Crawling Slash Attack: (Chu wo Hau Zangeki) Mihawk swings Yoru downward, causing a wave of compressed air to crawl along the ground towards his target in order to slice them in half. This attack dwarfs Whitebeard's Moby Dick in size, forcing Jozu to repel it with his own body.

Notes: The attacks noted above went unnamed in both the anime and manga, but were given titles in One Piece: Gigant Battle, as a result, they are still nothing more than casual attacks from him and are only named for convenience. 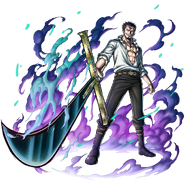 Mihawk as a child 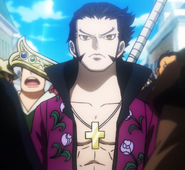