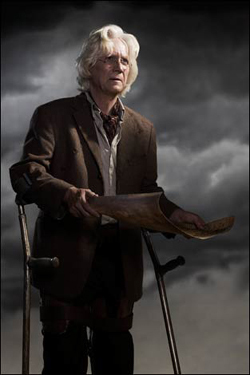 Dracula (also known as Amil Lazlo) was a brilliant professor at the University of Bucharest. Seemingly harmless, he is taken hostage by the villainous Kubichek, who wants Laszlo to lead him to the Judas Chalice. Later it is revealed that he is none other than Dracula, or Vlad the Impaler himself. After drinking from a victim infected by Cholera hundreds of years ago, he became weakened, into an almost human crippled form. Since then he has searched for the Judas Chalice, hoping to reawaken his dark powers. He was killed by Flynn Carsen at the end of The Librarian: The Curse of the Judas Chalice movie.

Attack Potency: Large Building level (By simply seeing Juda's Chalice and regaining his powers, he created winds that shook the mansion and produced lightning bolts outside). Higher with Judas' Chalice (Said that would "plunge the world into darkness"). Can bypass conventional durability with his teeth.

Durability: At least Large Building level (The father of all the vampires. None of them could harm him in the slightest)

Stamina: Nigh-Limitless (Unable to tire, except if he doesn't drink blood over a long period)

Intelligence: Genius (Was reconized as a brilliant mind even by Flynn Carsen, who by the time had at least 22 academic degrees).

Weaknesses: He is very proud and can underestimate most of his enemies. Can be killed by decapitation (that's not valid while he is with Judas' Chalice) and by a stake made of cercis siliquastrum wood. Has some aversion to light.

Start a Discussion Discussions about Dracula (The Librarians)