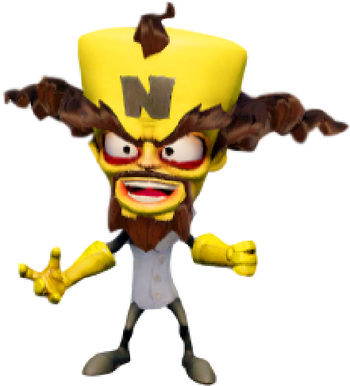 Doctor Neo Cortex is an evil scientist and the main antagonist of the Crash Bandicoot series. Prior to the events of the first game, he was looked-down upon and mocked by the scientific community for his experiments and theories which motivates him to conquer the world by creating an army of evil mutated animals.

He created Crash and attempted to brainwash him, only for the experiment to fail, causing Crash to escape and thwart his plan for conquest. He is usually aligned with the evil spiritual mask, Uka Uka, and often join forces with other scientists such as Dr. Nefarious Tropy in order to eradicate Crash and take over the world.

Tier: At least 7-B, higher with mutation

Powers and Abilities: Superhuman Physical Characteristics, Genius Intelligence, Martial Arts (Shown here ), Weapon Mastery, Vehicular Mastery, Breaking the Fourth Wall (Directly references other games), Toon Force/Regeneration (Mid; Can survive being flattened as seen in kart/racing games), Acrobatics (His single jump is just as high as Crash's double jump), Immortality (Type 2; Can survive without a brain and later somehow put it back on his head), Self-Sustenance (Type 1; Can breathe in space), Energy Projection, Paralysis Inducement and Empathic/Fire/Death Manipulation (His ray gun can induce these effects), Teleportation (As shown here), Flight (Via jetpack/hoverboard), Forcefield Creation (Can surround himself in a forcefield and via Power Shield), Explosion Manipulation (Via mines, bombs, tank and TNT/Nitro Crates), Temporary Invulnerability (Can wear Uka Uka as a mask and become invincible for a short period of time like Crash with Aku Aku), Healing and Power Modification (Can use Wumpa fruit to either heal or change his weapons' properties in Bash and Team Racing/Nitro Kart respectively), Time Manipulation (Can slow down time via N. Tropy Clock), Paralysis Inducement (Via Electro Stun Beam), Electricity Manipulation (Via Lightning/Static Orb/Electro Stun Beam), Air Manipulation (Via Tornado Tops), Summoning (Can summon anvils to fall on his opponent's head), Gravity Manipulation (Has an anti-gravity device), Duplication (Via Make-Another-Inator), Acid Manipulation (Via N. Brio's Beaker), Fusionism (Can merge 2 cars together), Statistics Amplification and Large Size (Type 0; Via mutation formula), Aura and Shockwave Manipulation (As seen here), Possible BFR (Via Warp Orb), Sleep Inducement (Via "Z" power-up), Sound Manipulation (Via Sonic Ring), Homing Attack (Via Red-Eye Missiles/Homing Energy Orb/Warp Orb), Dimensional Travel (Via Psychetron), Resistance to Pain (Isn't hurt by getting hit with a log and falling into spikes)

Attack Potency: At least City level (Comparable to Crash Bandicoot, Nina Cortex and various characters who can harm/damage him), higher with mutation

Speed: Supersonic+ with Massively Hypersonic+ or higher reactions (Can keep up with Crash and even drive/pilot vehicles which is capable of catching Oxide's hoverboard. Can dodge lightning bolts from Madame Amberly)

Lifting Strength: Unknown by himself. Superhuman with gadgets (Can lift rock blocks with his gun)

Durability: At least City level (Capable of consistently taking a great deal of punishment from the likes of Crash, Crunch and Uka Uka), higher with mutation

Stamina: High (Can withstand a beatdown from Crash and being used as a hammer)

Intelligence: Extraordinary Genius (Despite lacking strategic planning skills, Cortex is significantly smarter than Crash. Discovered a new element on his ending in Crash Team Racing. Made a device that can send beings to other dimensions since he was 8 years old. Outsmarted Uka Uka. Was able to fix N. Gin's brain after being hit with a rocket. Capable of mass-producing robots with life and distribute them through time. Has been creating advanced machinery for many years)

Weaknesses: While Cortex may be a genius, he doesn't have very much common sense and can be rather neurotic.