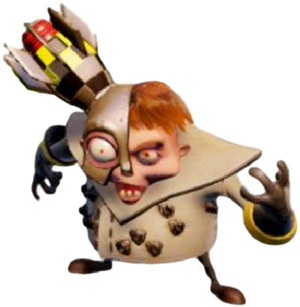 N. Gin is a cybernetic evil scientist and an antagonist in the Crash Bandicoot series. Once a world-renowned physicist in the defense industry, a budget cut caused one of N. Gin's rocket projects to go faulty, causing the rocket to go awry and lodge itself into N. Gin's head. To save himself, he stabilized the weapon and converted it into a life-support system at the cost of his sanity. Sometime later, N. Gin was taken in by Dr. Neo Cortex, and he has been his right-hand man ever since.

Tier: Unknown, at least 7-B with mechs

Attack Potency: Unknown, at least City level with mechs and weapons (Can harm Crash and Coco)

Speed: Unknown, Supersonic+ with his mechs, Speed of Light attack speed (via lasers)

Durability: At least City level (Can take hits from Crash, Coco, and others. Has survived the explosions of his mechs on multiple occasions)

Range: Standard melee range | Tens of meters to hundreds of meters with mechs

Standard Equipment: Various mechs, which include lasers and missiles

Weaknesses: N. Gin is insane. His mechs tend to have structural weakpoints, mostly in the openings of their weapons.

Retrieved from "https://vsbattles.fandom.com/wiki/Dr._N._Gin?oldid=5695648"
Community content is available under CC-BY-SA unless otherwise noted.