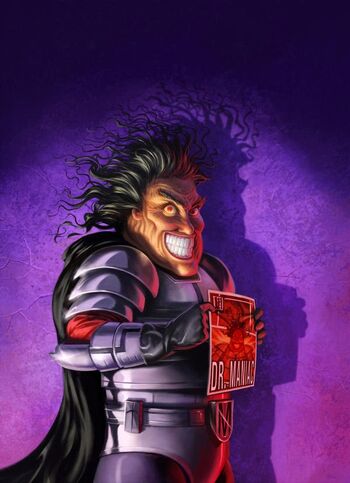 Powers and Abilities: Superhuman Physical Characteristics, Immersion (Often appears inside computers and arcade cabinets), Flight (Flew across a whole city to kidnap all the children), Technology Manipulation (Kept an arcade cabinet on despite it not being plugged in), Possibly Transmutation (Was said to be capable of turning people into squirrels), Regeneration (Low-Godly; Came back after being "deleted"), Immortality (Types 1 and 3; Characters from the comic book world don’t age), Fire Manipulation (Can create fire by rubbing his hands against each other), Limited Non-Corporeal (Can exist as a being made of data, however this is only when he is in the cyberspace), Resistance to Disease Manipulation (Didn’t get sick after eating a dead rotten squirrel)

Attack Potency: At least Street level (Is equals with The Purple Rage who shattered multiple windows and cracked a stone wall with a single punch)

Speed: Unknown (Kidnapped the entire child population in a city in a short amount of time)

Lifting Strength: At least Superhuman (Is equals with The Purple Rage who threw Robby Schwartz high into the air above the surrounding buildings)

Intelligence: Above average (Built an arcade cabinet through unknown means)

Retrieved from "https://vsbattles.fandom.com/wiki/Dr._Maniac_(Goosebumps)?oldid=5506269"
Community content is available under CC-BY-SA unless otherwise noted.