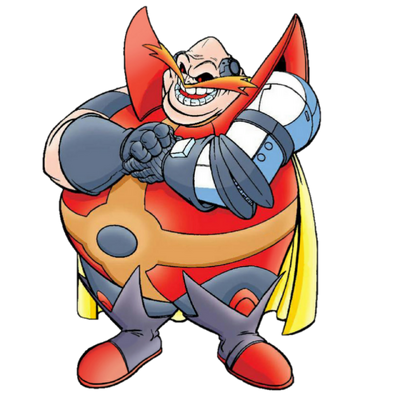 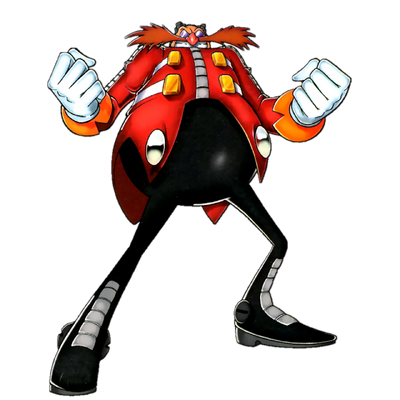 Dr. Ivo Robotnik, formerly known as Julian Kintobor, was a brilliant yet power-hungry mad scientist within the Overlander community until his twisted experiments landed him in prison. He managed to escape, forced to flee for his life and seek sanctuary among his people's sworn enemies: the Mobians. In exchange for his safety, Robotnik offered his services to Mobian King Maximillian Acorn, providing tactical information and decisive military leadership (with Robotnik being appointed the Royal Army's Warlord upon gaining the King's confidence) to bring an end to the Great War and drive the Overlanders off Mobius altogether, while also secretly planing his rise to power. Shortly afterward, Robotnik made his move and constructed mass robotic armies to lead a successful coup against the Kingdom, overthrowing the monarchy and becoming the tyrannical and despotic dictator of Mobius for the next ten years during a conflict known as the First Robotnik War. Eventually Robotnik's efforts to pacify the Freedom Fighter groups on Mobius led him to become obsessed with defeating the greatest of their number: Sonic the Hedgehog. This obsession led to his death, as he was killed in combat with Sonic during the conclusion of his greatest and most terrible plan Operation: EndGame, when his nephew and lackey Snively re-programmed his Ultimate Annihilator to erase him from existence. He was succeeded by his alternate-future counterpart, Robo-Robotnik v2.0, later known as Dr. Eggman.

Powers and Abilities: Superhuman Physical Characteristics, Preparation, Genius Intelligence (His robots have also Type 2 Inorganic Physiology), Combat Skills, 4th Wall Awareness, Technology Manipulation, Brilliant mechanic and inventor, Advanced Piloting skills, Hacking, Roboticization (Can transmute living beings into robot slaves subjected to his will with Roboticizers. Possesses Portable Roboticizers. In his robot bodies, he is capable of roboticizing others with a touch after preparation. Can roboticize entire planets with the Death Egg), Self-Sustenance (Types 1, 2, and 3), Energy Projection, Forcefield Creation (Blocked an attack from Rotor's Party-Hearty Quadra Sonic Rock 'N' Roller), Size and Statistics Reduction (With Shrink Ray), Mind Control (With the Psionic Emitter), Magnetism Manipulation (With Magnabot), Poison Manipulation (Can release poisonous purple gasses with the Toxomisters. Can inect victims with deadly toxins with Egg Grapes), Matter Manipulation (Can destroy things down to their atomic structure. Expected his gauntlet's "Particle-beam" to vaporize Sonic, implying that was its functionality. Built a machine capable of dissembling the molecules of Sonic and friends), Freezing (With his Freeze-Blaster, the Glaciator, and his Ice-bots), Fire Manipulation (Can spew flames his Egg Mobile. Also with the Egg Phoenix), Flight and Spaceflight (With the Egg Mobile, Eggs-o-skeleton, Rocket-boots, Death Egg, Egg Phoenix, and several other machines), Large Size (Type 0 to Type 2 for his machines), Immortality (Type 6 in robotic bodies. After "death", he can quickly instill his disembodied consciousness in another body via his assortment of robotic duplicates to continue his antagonistic ways), Weather Manipulation (With the Weather Annihilator), Body Control (In robotic bodies only. Can sprout mechanical tentacles), Time Stop (With the Time-Immobilizing Ray), BFR (Banished King Acorn to the Zone of Silence via the Transdimensional Transporter. Can banish foes to the Egg Grape Chamber with a blast from his gauntlet and do the same with blasts from the Egg Beater and the Egg Fleet. Can banish enemies to separate dimensions via Chaos Emeralds), Can bypass force-fields, Duplication (Can spawn perfect duplicates of himself with the EggMobile), Absorption (The Egg Grapes drain life-force. Has built machines with enough potency to drain Enerjak Avatars and Super Sonic), Binding (Can encase enemies in Mega Muck to restrict their movement capabilities), Electricity Generation and Paralysis Inducement (Through physical contact. Can also trap foes in force-fields of electricity), Dimensional Travel, Explosion Manipulation (Possesses nuclear warheads capable of exterminating life on a city-wide or even planetary scale), Gravity Negation (With his gauntlet he can negate the forces of gravity on himself), Reality Warping, Space-Time Manipulation, Teleportation, Portal Creation, Conceptual Manipulation (Type 2) and Law Manipulation (With Chaos Emeralds and the Cosmic Reset Button), Existence Erasure (With the Ultimate Annihilator and Chaos Emeralds), Memory Manipulation, Resistance to Toxins, Cosmic Radiations, Sub-Zero temperatures, Madness Manipulation, and Mind Manipulation

Attack Potency: Building level (Can easily one shot SWATbots. Can match and harm beings with comparable durability), Universe level+ as Robo-Robotnik V2.0 (Fought with Sonic on equal footing), Varies from Universe level+ (Fought Sonic with the Egg Beater, Egg Tarantula, Egg Destroyer Battlesuit, ect) to Multiverse level+ with machinery (Can rewrite all of reality with the Super Genesis Wave. Fought with Super Sonic and Super Armor Mega Man with the Egg-Wily Machine X), can bypass conventional durability in several ways

Speed: Superhuman with Massively FTL+ reactions and combat speed (Can react to Sonic), Immeasurable with the Super Egg-Wily Machine X

Durability: Building level (Has tanked massive explosions on several occasions), Universe level+ and forcefields and robot bodies, Varies from Universe level+ to Multiverse level+ with machines, transmution and immortality make him difficult to harm or kill

Stamina: High, Limitless with machines and in robot bodies

Range: Standard melee range. Varies ranging from Hundreds of meters to at least Multiversal+ with machines

Intelligence: Supergenius. Robotnik is an ingenious and cunning individual. Calculating and deceptive, Robotnik was able to successfully win the Great War, overthrow the Kingdom of Acorn, and rule for over a decade. During his reign, Robotnik masterminded numerous schemes to undermine the Freedom Fighters. A scientific genius of remarkable skill, he has an created and managed a global empire. This includes mechas and battalions of robots equipped with instruments far surpassing modern weaponry, machines capable of defying the laws of physics, and even artificial intelligence. His intelligence was retained by his alternate-future counterpart and successor Dr. Eggman

Weaknesses: Insane. Often allows his hatred for Sonic the Hedgehog and the Freedom Fighters cloud his better judgement. Many of his machines require prep time

Robo-Robotnik
Add a photo to this gallery

Frieza (Dragon Ball) Frieza's Profile (Post-Tournament of Power Frieza was used, Robotnik had all of his machines up to Low 2-C, and speed was equalized)