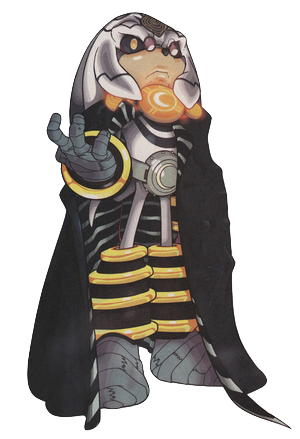 Doctor Finitevus was an Echidna from the city of Albion, and one of the last known surviving citizen of that city by birth. He was transformed into an Albino Echidna after using his creation, the Chaos Siphon Suit in an attempt to drain Chaos Knuckles' power and restore him to normal. After this, Finitevus's mind has slowly transformed into that of a villainous mad scientist, who betrayed his city to the Eggman Empire.

He has continuously come at odds with Knuckles the Echidna in his efforts to end all life on Mobius.

Striking Strength: Universal+ (Can damage Knuckles and match his strength)

Durability: Universe level+ (Took a beating from an enraged Knuckles)

Range: Standard melee range. Tens of kilometers with most attacks and abilities. Universal+ with Warp Rings

Intelligence: Supergenius. His skills include not only robotics and mechanical expertise, but also a level of magical ability.

Weaknesses: Despite his intelligence, he is very insane.