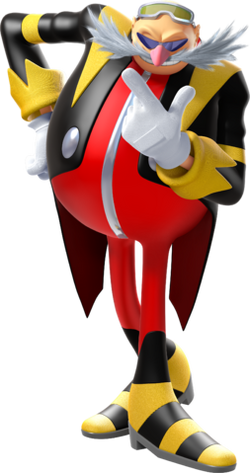 Doctor Eggman Nega (ドクター・エッグマン・ネガ Dokutā Egguman Nega?) is a major antagonist in the Sonic the Hedgehog series. He is a human scientist and the descendant of Dr. Eggman from approximately two hundred years into the future, though he initially introduced himself as Dr. Eggman's alternate counterpart from Blaze's world.

Attack Potency: Wall level (Should be equal to Dr. Eggman) | Varies from Planet level+ (Could fight evenly with Adventure Sonic and Blaze in Sonic Rush. Can fight the likes Modern Sonic, Shadow, and Silver in the Sonic Rivals series) to Low Multiverse level (Capable of piloting the Egg Salamander and Egg Wizard which are energized by power sources of this potency), can bypass conventional durability in several ways

Speed: Superhuman | Varies from at least FTL to Massively FTL+

Weaknesses: Is overconfident and possibly insane.

Key: Base | With Mechas

Retrieved from "https://vsbattles.fandom.com/wiki/Dr._Eggman_Nega?oldid=6367268"
Community content is available under CC-BY-SA unless otherwise noted.