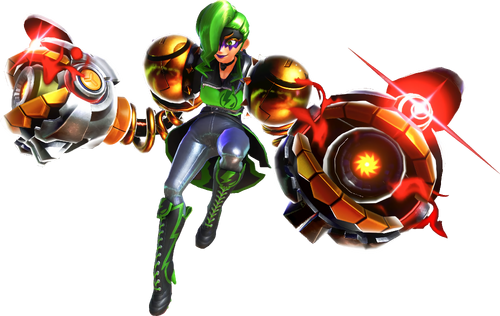 Dr. Coyle is a playable fighter in ARMS.

She's the director of ARMS Laboratories and a certified genius. Fascinated with ARMS since she was a young girl, Dr. Coyle decided early on to devote her entire life to ARMS research. Her plans for this research are not necessarily nefarious... She simply wants to be the most powerful ARMS fighter of all time... even if that means subjecting herself to her own experiments. She is the creator of Hedlok, Springtron, and Helix, as well as being responsible for Master Mummy's reanimation.

Attack Potency: At least Building level (Stronger than other ARMS fighters, who can all wield ARMS capable of demolishing buildings), most likely higher (Stomped Max Brass, sending him flying and knocking him out cold, destroyed Hedlok's body in a tantrum)

Speed: At least Subsonic (Can react to other ARMS fighters and Multi-shot ARMS)

Intelligence: High (Creator of Springtron, Hedlok and Helix, head scientist of ARMS laboratories), Low in Emotional Intelligence (Unable to understand her own emotions and feelings)

Retrieved from "https://vsbattles.fandom.com/wiki/Dr._Coyle?oldid=6226432"
Community content is available under CC-BY-SA unless otherwise noted.