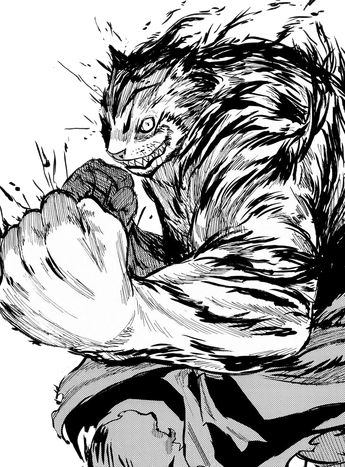 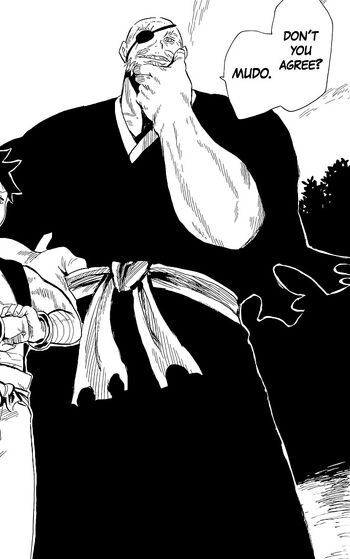 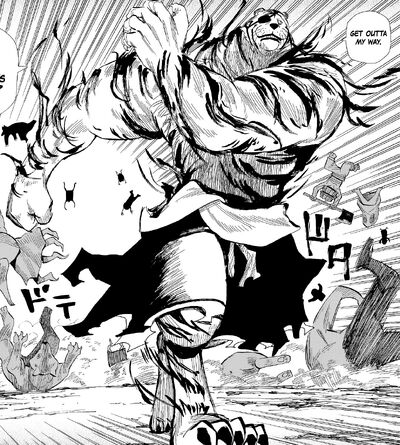 Douren (Real name is Dousuke) was one of the four beast generals of the Dangaishuu. He was introduced as an anti-hero, having two fights against Jinka Yamato during the Part 1. Later he becomes the master of Mudo, and also an ally of Senya and Tama in they goal to save his friend Jinun and defeat the Tribe of Void.

Speed: Speed of Light (Can throw hundred of punchs at the speed of light. Far superior to Senya, who easily did this) | FTL (Faster than Jinun)

Durability: At least Small City level+ (Tanked blows from Jinka Yamato, and was still fully conscious after being hitted by a Souls of five elements, which ripped off Jinun's arm) | At least Mountain level, likely higher (Supported many attacks from Jinun)

Stamina: Very High (He was able to fight for a whole day without stopping against a tiger demon before owning a transformation. Physically the most profitable member of Dangaishu, having a vigor above characters like Jinun. Great monks compare his presence with an entire army).

Range: Extended melee physically via his size | Hundred of meters with shockwaves (Destroyed an arm of Banshouou)

Intelligence: Above Average mentally (Even being a man without much knowledge as young,, Douren was able to learn to read on his own in a few days, and was still able to read numerous complex martial arts books to improve his techniques. His mind was the only one able to defeat control of The Tribe of Void, since he is a man who accepts defeat when there are no options. Although don't looks like, he is a man who understands the complexity line of techniques involving space-time). Extreme Combat Genius (Douren has trained many different types of martial arts nonstop since childhood, mastering a variety of exotic and complex skills. He considers the fist to be the divine art of man, and as such he gains a unique fighting style. Douren is able to adapt to the enemy's fighting style, and from that dodge and counterattack all his blows with mastery, combining his combat techniques with the speed of his demonic transformation. He was also able to train a dragon, being very martially admired by his apprentice).

Weaknesses: Upon seeing breasts, he may lose his posture for a while.

God of Destruction Boxing: A fighting style based entirely on fists. Douren mastered this art while in the west. He usually begins to lunge at his opponent in a combat pose and from there, deflects a multiple punch wave at him, countering the enemy with a quick punch if he tries to deflect. With this art he was able to shape and create his own style, with the most diverse attacks.

finalization
Add a photo to this gallery 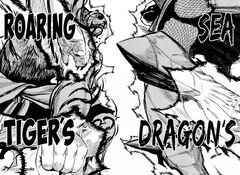 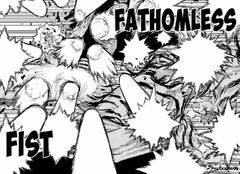 attack being performed
Add a photo to this gallery

All Might (My Hero Academia) All Might's profile (Both at Low 7-B. Speed was equalized)