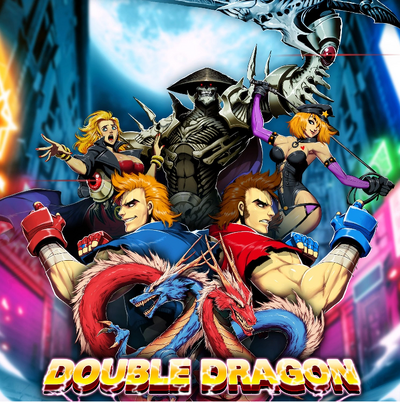 For detailed information about this series, visit the Double Dragon Wiki.

Double Dragon is a beat 'em up video game series initially developed by Technōs Japan (currently owned by Arc System Works) which debuted first on arcades in 1987. The series stars twin martial artists, Billy and Jimmy Lee, as they fight against various adversaries and rivals (mostly the Black Warriors criminal gang) to rescue their girlfriend Marian Kelly. Due to the popularity of the game series, an American comic book (by Marvel Comics), animated series and live-action film adaptation have also been produced.

Double Dragon is very formidable when it comes to it's power/attack potency. The Lee brothers are able to harm/damage Abobo, who can easily break walls and wreck up the entire room's floor to make rubble fall from an upper floor which is about Small Building level. They can even lift and throw giant boulders/rocks/stone slabs from a same feat. Their speed also comes from the Lee brothers being able to quickly dodge machine gun bullets shot by Willy Mackey, making their reaction speed being Supersonic.

Yagyu Ranzou
Add a photo to this gallery

Skullmageddon
Add a photo to this gallery