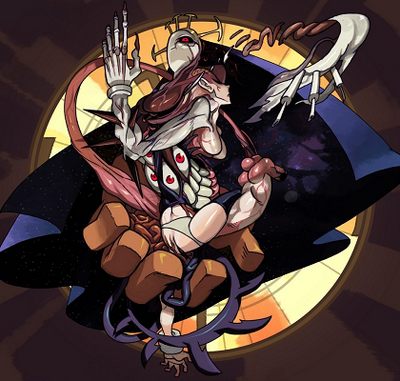 Double’s origins are a complete mystery. Seemingly without a will or motive of its own, this formless is responsible for ensuring that the Skull Heart falls into the "right" hands and manipulating events according to the goddesses' will.

Double is capable of transforming its nightmarish form into that of any person, but often appears as a smiling nun. It can frequently be found in the Grand Cathedral of the Divine Trinity, listening to confessions and attending to the catacombs beneath.

Classification: Shapeshifter, Emissary to the Skullgirl

Attack Potency: At least Multi-City Block level (Defeated Filia, Cerebella, Peacock, Parasoul, Ms. Fortune, Painwheel, Valentine, and the Skullgirl in her storyline, Killed Hallow, who is comparable to Valentine, The realm of Gehenna, which is large enough to house an entire civilization, was created by and is a part of her, Stated by Squigly that Double has power equal to that of the Skull Heart)

Speed: Hypersonic (Can keep up with Peacock, Valentine, and Miss Fortune)

Range: Standard melee to hundreds of meters depending on form and attack