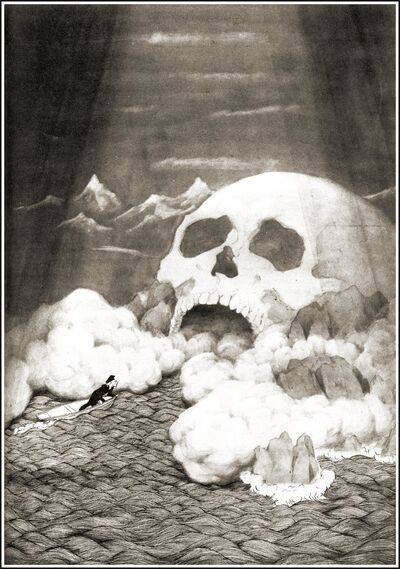 Dorozhand, known as the one 'Whose Eyes Regard the End', is the God of Destiny who exists beyond the small gods as well as all other gods of Pegāna. While Dorozhand manages the fates of all things within creation, his primary purpose is self-fulfillment, or more precisely, to meet his end in a way that he is already aware would happen. Dorozhand knows all that will happen up to the time of The End and is given the task to drag everything along with him up to that point where Mana-Yood-Sushai will awaken.

Name: Dorozhand, Whose Eyes Regard the End

Powers and Abilities: Superhuman Physical Characteristics, Self-Sustenance (Types 1, 2, and 3), Immortality (Types 1 and 5. Mung who represents the concept of death is bound by the will of Dorozhand), Extrasensory Perception, Creation, Clairvoyance (Sees everything that will happen up the moment of The End), Fate Manipulation, Life Manipulation (The purpose of the Worlds is to sustain life, and Life is the instrument of Dorozhand), Empathic Manipulation, Abstract Existence (Type 1. Exists as the concept of destiny and fate in which Dorozhand assigns and determines the fates and futures for all things within creation), Conceptual Manipulation (Not only the fates of men determined by Dorozhand but even the fates of gods of Pegana are bound by his will, including Mung who represents death and Roon who represents action), Fear Manipulation, Avatar Creation, Dream Manipulation, Sleep Manipulation (Woke up Imbaun from sleep with a touch), Time Travel (Can walk into times of the future up to the moment of The End), possibly Higher-Dimensional Existence (Due to depiction, it is not certain whether the term "World" refers to celestial bodies or universes. Regardless, Dorozhand exists on a level beyond the material world), Acausality (Type 5. Roon, who manages cause and effect is bound by the will of Dorozhand as are all Small Gods. Roon as the concept of action who manages cause and effect, along with all other Small Gods, have no claim over the will of Dorozhand, who instead exists beyond the gods including Roon)

Attack Potency: At least Large Star level (Feared by the Small Gods and Gods of Pegāna, who created the Worlds and Suns with a raise of a hand, including Slid who painted the stars that make up the starry night skies. All Small Gods and Gods of Pegāna are bound by the will of Dorozhand and have their fates determined by it), possibly far higher (Due to depiction, it is not certain whether the term "World" refers to celestial bodies or universes. Regardless, Dorozhand exists at a level beyond the material world).

Speed: Omnipresent (As the concept of destiny, he exists within everything and is in the future of everything).

Intelligence: Nigh-Omniscient. Sees everything and knows exactly what will happen up the moment of The End when Mana-Yood-Sushai awakens