VS Battles Wiki
Register
Don't have an account?
Sign In
in: Characters, Marvel Comics, Reality Warpers,
and 30 more 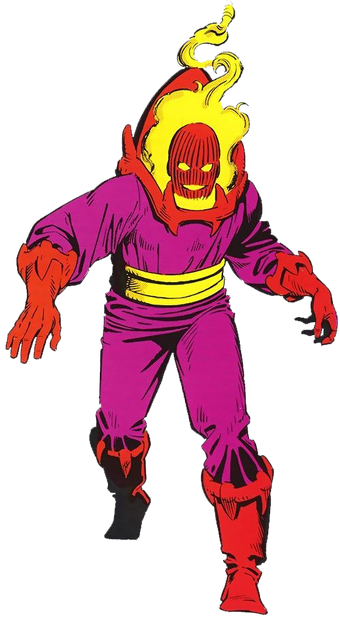 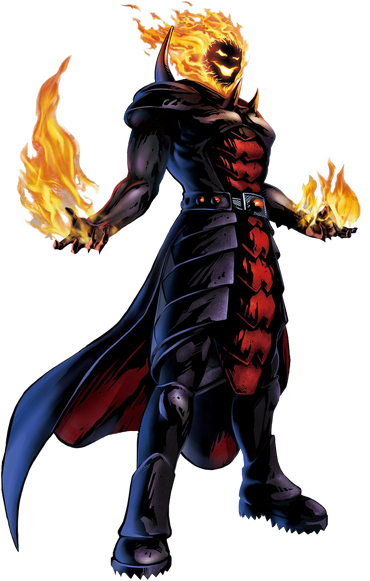 Dormammu is the ruler of the Dark Dimension and the archenemy of Doctor Strange. After he and his sister Umar killed their own father in their home realm, they were forced to flee to the Dark Dimension where they taught to its ruler King Olnar the ability to absorb universes into his dimension in exchange for a residence. However, Olnar was later killed by an Invasion of the Mindless Ones, which were defeated by Dormammu and Umar. Since there was no king left, Dormammu took the throne for himself and absorbed the flames of regency to increase his own power.

Powers and Abilities: Superhuman Physical Characteristics, possibly Higher-Dimensional Existence (Born in the Faltine realm, which has more dimensions than the Dark Dimension, which was described as having "a greater number of spatial dimensions than man’s universe"), Genius Intelligence, Magic, Immortality (Types 1), Power Absorption via Biological Absorption, Void Manipulation, BFR, Summoning, Sealing, Flight, Life force and Energy Absorption, Forcefield Creation, Reality Warping in his own dimension, Creation, Telepathy (Both offensive and defensive), Illusion Creation, Dream Manipulation, Fire Manipulation, Soul Manipulation, Energy Manipulation, Matter Manipulation, Petrification (Turned Hulk to stone), Time Travel, Shapeshifting, Size Manipulation, Dimensional Travel (Can travel between universes), Spatial Manipulation (Can merge other universes to own dimension), Sleep Manipulation (Made a potion to put the Mindless Ones to sleep), Power Nullification (Revoked Thor’s godhood and Iron Man’s armor), Cosmic Awareness (Has mystic senses. Nothing can approach the Dark Dimension without his knowledge), Mind Manipulation (Controlled Scarlet Witch),  All the powers and resistances of Doctor Strange (Knows all of Strange's spells, and gained all of Strange's memories), Deconstruction (Can turn somebody into embers), Upon absorbing the power of Multiversal Eternity, he displayed the powers of Omnipresence and Omniscience, Possibly Resistance to Space-Time Manipulation (Implied that he was unaffected by space and time, although their manipulation can destroy him when weakened)

Attack Potency: Multiverse level+ (Stated twice to be capable of challenging or defeating the entire Celestial race. Mephisto needs to be helped by Satannish, Hela, Daimon Hellstrom and Pluto to face Dormammu), possibly Low Complex Multiverse level (Sustains the existence of the Dark Dimension, which has been described as having more dimensions than man’s universe. Implied to have killed The Trinity of Ashes and Slorioth, who rival the Vishanti and threaten Eternity just by existing, respectively. One-shot Giraud, who wounded Eternity) | Low Outerverse level (With the help of Umar, he was able to defeat Multiversal Eternity. Stated that he could conquer the multiverse and melt all creation into a pool of cosmic slag. Consumed a council of pandimensional beings. Had control over a pandimensional army and killed a large portion of them in a fit of rage. He later absorbed the power of Multiversal Eternity, and threatened to destroy the entire multiverse)

Standard Equipment: The Flames of the Faltine

Intelligence: At least Extraordinary Genius according to the latest handbooks. Capable of outsmarting cosmic beings, with extreme knowledge of magic, and intimate knowledge of many magical realms and universes. Omniscient after absorbing Multiversal Eternity’s power.

Weaknesses: His magical powers are weakened beyond the boundaries of the Dark Dimension such as in the main 616 universe. Time travelling exhausts him, and he is unlikely to use it. He is also incredibly arrogant.

Key: Base | Amplified by the Cosmic Axis 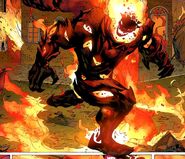