VS Battles Wiki
Register
Don't have an account?
Sign In
Advertisement
in: Dragon Age, Characters, Male Characters,
and 21 more 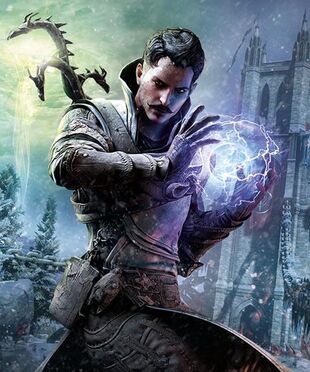 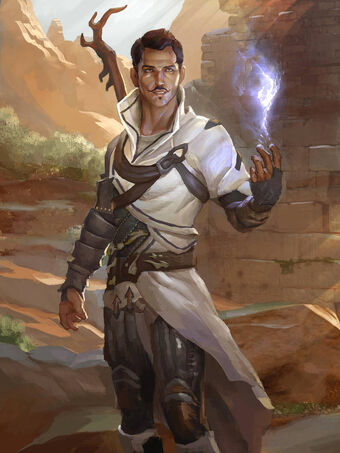 Dorian was born to the prestigious House Pavus of Qarinus in the Tevinter Imperium, demonstrating from an early age a flair for magic which made him the envy of his peers. Dorian studied at the Circle at Carastes, but was expelled at the age of nine after a duel with another magister's son left the other boy injured. He then moved from Circle to Circle and through private tutoring situations, though each tenure ended after another incident. In desperation, his father sent him to Minrathous to attend a smaller school run by the Order of Argent, known for their adherence to strict Andrastian discipline and exorbitant entry fees. Dorian disappeared three months later. He was found in a drunken stupor at a house of ill repute in the elven slums by Magister Gereon Alexius, who was amused enough by his behavior that he convinced Dorian to return to the Gilded Quarter rather than call the templars. Alexius was impressed by the conversation they had in the carriage and offered to take him as his apprentice. Dorian was personally tutored at the Alexius estate in Asariel, where he flourished. Four years later, he became a fully-ranked Enchanter in the Minrathous Circle. He split his time between aiding Magister Alexius in his research and partaking in the life of a well-heeled scion. He participated in Lower Floor debates of the Circle and attended social functions and balls.

With his magical ability, wit and charm, it would seem he would have had a promising career in Tevinter had Dorian not become a pariah for opposing every fault his homeland is known for. Dorian bears his ostracism with pride as he feels Tevinter will only change if someone like him makes a difference.

In the two years since Corypheus' defeat, Dorian has since become the official Tevinter ambassador to the Inquisition. The Inquisitor re-encounters him at the Winter Palace while he is in the middle of a conversation with Duke Cyril de Montfort.

Dorian explains to the Inquisitor that his father is dead, presumably by assassination, and he is to inherit his seat in the Magisterium, meaning he'll be departing the Inquisitor's company permanently.

Powers and Abilities: Weapon Mastery (Staves), Reality Warping (Mages draw forth the essence of the Fade, and can use it to warp reality), Magic, Elemental Manipulation (Of fire, lightning and ice variety), Homing Attack, Soul Manipulation, Healing, Forcefield Creation, Energy Manipulation, Automatic Defenses, Mind and Pain Manipulation (The Mind Blast spell can send people flying backwards, causing excruciating pain as well as draining the power of said pain to empower one's forcefield. Can remove negative status effects with it as well), Fear Manipulation, Time Manipulation (Easily countered Alexius' spell without even knowing what it was), Statistics Amplification (Can increase the speed of his allies and of himself), Magic Nullification and Absorption, Intangibility, Necromancy, Summoning, Resistance to Soul Manipulation, Telekinesis

Attack Potency: Small Town level (Even though he's no Magister until the events of 9:44 Dragon, he's still remarkably powerful. Undid Alexius' magic, and helped fighting against him. Can fight and defeat Grand Enchanter Fiona, and is superior to the Inquisitor)

Range: Hundreds of meters with his magic.

Intelligence: Genius (A cunning mage, capable of tricking even the most experient and intelligent Magisters. Capable of developing magical theories with little to no effort, as well as recognizing magic when it's used. Could tell the difference between regular wounds and those inflicted by demons with ease)

Weaknesses: Emotionally dependent on his amatus (which could be the Inquisitor himelf or the Iron Bull).