VS Battles Wiki
Register
Don't have an account?
Sign In
Advertisement
in: Tier 9, Tier 9-B, Characters,
and 91 more 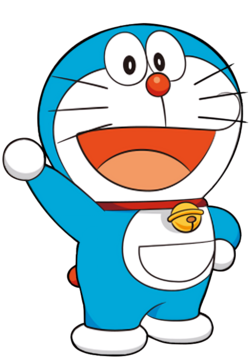 #MS-903 "Doraemon" or simply Doraemon is the main, titular character of all Doraemon media (including, but not limited to the original manga, anime, video games, and movies).

He is a robot cat from the 22nd century who travels back to 20th century to help improve the miserable life of Nobita, who will become the great-great-grandfather of Sewashi, Doraemon's friend. Doraemon's is usually represented by the color blue.

Age: At least 10 (Older than the 4th grader Sewashi by an unknown degree)

Superhuman Physical Characteristics, Enhanced Senses (Infrared eyes allowing clear vision within darkness, nose 20 times better than humans), Invisibility (Early on in the series, Doraemon can turn invisible by pulling his tail, before his tail became his hibernation switch), Resistance to digestive acids and Mind Manipulation (Cannot be affected by hypnosis meant for humans and is completely immune to mind-control gas [Due to being the same type of robot as El Matadora], but his mind still can be tampered with by 22nd-Century gadgets or supernatural entities), can enter a state of pseudo-death similar to hibernation, the built-in magnets within his hands allow him to stick to any surface

Attack Potency: Wall level (Has 129.3 horse-powers, making him 259 times stronger than an average human. Capable of attacking bigger robots by tackling them ) | Street level to Large Building level with standard firearms (his standard firearms can range from the Air Cannon that can KO any human at its weakest to the Flamethrower that can reduce a skyscraper to ashes). Possibly Planet level with Earth-Destruction Bomb (This bomb can supposedly destroy Earth, although it has never been used and the level of destruction is not detailed). Higher to an extent via Size Manipulation (Several size-manipulating gadgets allow him to grow larger in size, thus increasing both his physical strength and the powers of his gadgets), which likely caps at Multi-Continent level (At his biggest shown size, he was able to destroy Mafuga’s body with his Air Cannon, one of his weaker actual weapons. At this size, his Earth-Destruction Bomb can theoretically yield Solar System level+ energy, if it truly yields Planet level energy at standard size). Universe level+ with the What-If Phone Booth (The Phone Booth can create an alternate reality almost identical to the root universe, with the only difference being the What-If scenario the user spoke to the phone. Wishing to undo the scenario to the phone will cut this alternate reality from the root universe, making it a parallel, separate reality). Many of his gadgets do not focus on destruction and ignore durability.

Speed: Average Human normally, can run at Subsonic speed (129.3 km/h) when exposed to mice | Can use gadgets to adjust his speed

Lifting Strength: Peak Human (Can lift objects such as a phone booth or a door, as well as other members of the Doraemons, who each weighs 129.3 kg) | Can use gadgets to adjust his lifting strength

Striking Strength: Wall Class | Can use gadgets to adjust his striking strength

Durability: Wall level (Survived falling from a tree at least 2-storey high, had no visible physical injury after banging his head repeatedly against a metal door to the point of denting it, relatively uninjured from charging and breaking into a space shuttle at accelerated speed, and a giant theropod couldn’t bite through him) | Can use Size Manipulation and Statistics Amplification to increase his durability, which likely caps at Multi-Continent level (His durability is generally higher than the damage output of his Air Cannon). Can also use Intangibility to become even harder to damage.

Stamina: At least Above Average (Could run for hours when his speed was boosted beyond his control, and could survive for several minutes after his core component had been ripped out of his body) | Can increase his stamina with certain gadgets

Intelligence: Above Average (Has significant knowledge of Earth’s history, geography, science, and other academic subjects, due to his purpose as an assistant robot. Managed to hack and modify an alien computer but not without immense efforts. He has demonstrated the ability to analyse the situation in the middle of a battle and try to see a weakness in the enemy, as well as the ability to develop strategies against opponents well beyond his level [such as luring and trapping an army of robots within a mirror dimension to prevent them from invading Earth, or developing plans to distract the enemy’s main forces so that he can approach the now unguarded mastermind]. Demonstrated some high levels of leadership in the spin-offs as leader of the Doraemons. The Talent Cassettes can also grant him mastery of specific human talents such as martial arts, as a Cassette contains the data of that specific talent from history well into the 22nd Century.)

Weaknesses: Due to having his ears chewed on by a mouse in the past, Doraemon has an extremely strong hatred of mice (usually this is displayed in the form of screaming and panicking, although a prolonged exposure to mice can drive him into bloodlust). He is very addicted to Dorayaki and sometimes can be manipulated using said sweets. He often takes out the wrong gadgets when he panics. (However, using certain gadgets can remove his psychological weaknesses). His pocket can be nullified by certain electromagnetic waves (such as in proximity to auroras). As a robot cat, he stops functioning if his tail is pulled, although if the tail is pulled again, he simply regains his consciousness. He is short-tempered, conceited, temperamental and slow-witted (sometimes).

Standard Equipment: Thousands of gadgets from the 22nd century kept within his 4-D pocket.

Notable Attacks/Techniques: See here. Please note this blog only lists gadgets that are combat-applicable and therefore contains a mere fraction of gadgets in his arsenal.

Key: Base | Using his gadgets

SCP-939 (SCP Foundation) SCP-939's Profile (Base Doraemon was used, speed was equalized and the battle took place at Throat of the World)