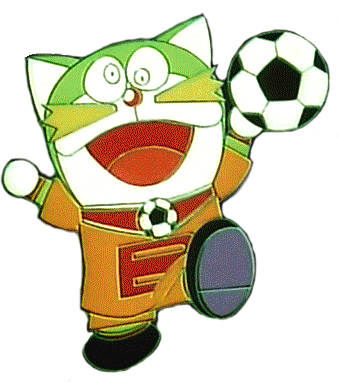 Dora-Rinho (ドラリーニョ, Dora Rīnyo) is one of the holders of the "Best friend Telecard" and a member of the Doraemons.

The comic relief character of the group, Dora-Rinho is infamous for his forgetfulness and generally quirky, air-headed behavior. Despite this, he is a master athlete and a famous soccer player. He is usually followed by 11 Mini-Doras.

Since his graduation, he has been living in modern day Brazil, and friends with a Brazilian boy named Nobinho, with their relationship reflecting the friendship between Doraemon and Nobita.

Age: Should be the same as Doraemon

Power and Abilities: Superhuman Physical Characteristics, Enhanced Senses (Infrared eyes allowing clear vision within darkness, nose 20 times better than humans), Resistance to digestive acids, Mind Manipulation (Immune to hypnosis meant for humans [scaling from Doraemon] and mind-control gas [Immune to a gas that can control at least a dozen people], but his mind still can be tampered with by 22nd-Century gadgets or supernatural entities) and Telepathy (His "empty head" can not be read by certain telepaths), can enter a state of pseudo-death similar to hibernation, the built-in magnets within his hands allow him to stick to any surface, Combat-useful soccer skills

Speed: At least Athletic Human, possibly higher (Shown to be the fastest of the Doraemons due to being an athlete. He could run on water while carrying Dora-med, although it may be an outlier)

Lifting Strength: Athletic Human (Can lift other members of the Doraemons, who each weighs 129.3 kg)

Durability: Wall level (Should be comparable to Doraemon and Wang Dora)

Stamina: Athlete level (As the athlete of the group, he should have stamina at least comparable to physical fighters like El Matadora and Wang Dora)

Standard Equipment: While he carries some soccer balls that come in handy for battle, Dora-Rinho can technically use his soccer skills on anything he can find and kick. He can also access the same gadgets as Doraemon from his own 4-dimensional pocket. He also has a team of 11 Mini Doras who all have gadgets similar to his, albeit weaker due to their smaller size.

Intelligence: Above Average. While an airhead most of the time, Dora-Rinho has often demonstrated the ability to observe, analyze situations, and create solutions on the fly.

Weaknesses: Dora-Rinho is generally forgetful and air-headed, although this is largely toned down in serious situations. He stops functioning if his tail is pulled.

Retrieved from "https://vsbattles.fandom.com/wiki/Dora-Rinho?oldid=5502386"
Community content is available under CC-BY-SA unless otherwise noted.