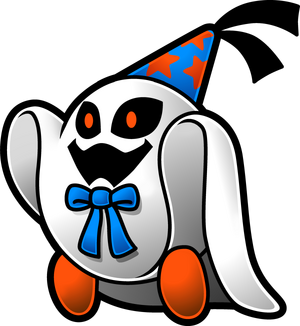 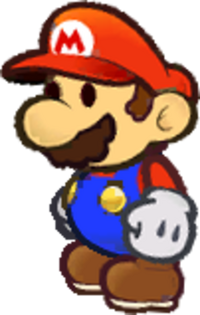 Doopliss is a reoccurring villian in Paper Mario The Thousand Year Door. He first meets Mario and was revealed to be the one turning everyone into pigs because the town was boring and depressing. He then fights Mario, only to steal his body and use it against him.

Attack Potency: Multi-Solar System level (Can fight Mario and his partners. Was able to completely take over his body and physical abilites, along with his partners who are comparable to Mario)

Speed: Massively FTL+ (Can keep up against Mario and his partners. Copied their physical bodies eventually)

Durability: Multi-Solar System level (Took several hits against Mario and his partners. Should also scale when copying their bodies)

Range: Standard Melee Range, Extended Melee Range with weapons, varies from several meters to tens of meters with items and when copying others

Intelligence: Above Average (Was able to turn a town into pigs, copy Mario and his partners abilites, and can trick them along with other people twice)

Weaknesses: Saying his name will break his magic, but this does not stop him from transforming.

Head Missile: Doopliss flies in the air and charges at his opponent.

Transform: Doopliss can copy his opponents and turn into previous ones, allowing him to copy their powers and looks. Or he can completely take over your body and leave you as a shadow.

Retrieved from "https://vsbattles.fandom.com/wiki/Doopliss?oldid=6281356"
Community content is available under CC-BY-SA unless otherwise noted.