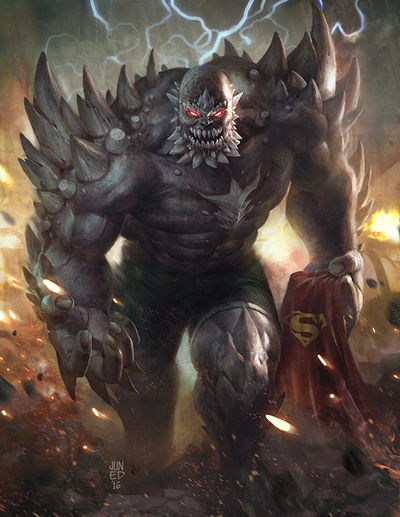 Doomsday was created on prehistoric Krypton thousands of years ago by a scientist named Bertron as a bio-mechanical super-soldier and living weapon of mass destruction.

This process involved Bertron cross-breeding the artificial birth of a Kryptonian hybrid, left to fend for itself in the more harshest environments of the Kryptonian wilderness with creature killed and its genetic material collected to create a more resilient clone. This process, along with a further cross-breeding with the DNA of the strongest creatures on Krypton, was repeated over and over for decades as a form of accelerated natural evolution.

The agony of these repeated deaths was recorded in the genes of Bertron's final creation, driving the creature insane and to follow one overwhelming instinct: destroy everyone and everything in sight. When the creature proved too difficult to control, the Council discontinued Bertron's experiments and banned all forms of cross-breeding while having the creature jettisoned into the Phantom Zone. However, the beast acted in his final moments of consciousness to change the stasis cell's trajectory and it eventually crashed on Earth, the force of the impact driving it deep underground.

The beast slept for centuries before finally reviving and bursting free. Dubbed "Doomsday" by Booster Gold, the beast is still motivated by his instincts to kill everything around him yet has a greater obsession to kill all Kryptonians.

Age: Thousands of years old at the least

Powers and Abilities: Superhuman Physical Characteristics, Adaptation, Accelerated Development (Battle, Passive; Abilities, Physical Stats) & Reactive Evolution (Able to adapt to his opponents' abilities and attacks, to the point of developing new powers/abilities on the fly to counter them, such as fire breath to defeat Martian Manhunter, flight and metal armor, the ability to absorb energy to counteract energy attacks, Cyborg Superman's metallic shell and technopathy, and even learning to use a Green Lantern Ring. Also becomes increasingly resistant to the things he has survived), Regeneration (Low-High), Immortality (Types 1, 3 & 4), Resurrection, Self-Sustenance (Types 1 & 2; Doesn't need to eat or breathe. Has no internal organs), Non-Physical Interaction (Can harm intangible beings), Enhanced Senses (Can see every detail of constructions miles away), Acrobatics (Able to leap vast distances, being thought by Superman to be as agile as he is strong), Absorption (Of solar energy and energy attacks), Body Control, Bone Manipulation & Poison Manipulation (Can protrude razor-sharp spikes of bone from his body, which can secrete poison, extend several meters and be used a makeshift rope), Fire Breath, Energy Projection, Attack Reflection (Warded off Waverider's energies), Power Nullification (Canceled out Radiant's energy), Spatial Manipulation (Broke through the Phantom Zone's dimensional barrier), Resistance to Ice Manipulation (Can survive in space. Got frozen by Superman and broke free), Mind Manipulation, Ultrasonic Attacks, Energy Attacks (Adapted to Radiant's energy and the Guardians of the Universe), Possession (After Brainiac inhabited his body Doomsday began fighting back & trying to cast him out)

Attack Potency: Solar System level (Fought an early Superman to a stalemate, causing their mutual deaths. During Hunter/Prey, he grew powerful enough to overpower Darkseid. Later portrayed as at least comparable, if not superior to Superman)

Speed: Massively FTL+ (Consistently depicted as being able to keep up with Superman)

Durability: Solar System level (He shrugged off numerous hits from Superman throughout their fights, but he was ultimately destroyed by the entropy at the end of time), his regeneration, reactive evolution and resurrection make him very difficult to kill.

Intelligence: Doomsday is capable of instinctively processing information extremely quickly, though he is simple-minded for the most part.

Spawn (Image Comics) Spawn's Profile (Both at 4-B, and speed was equalized)