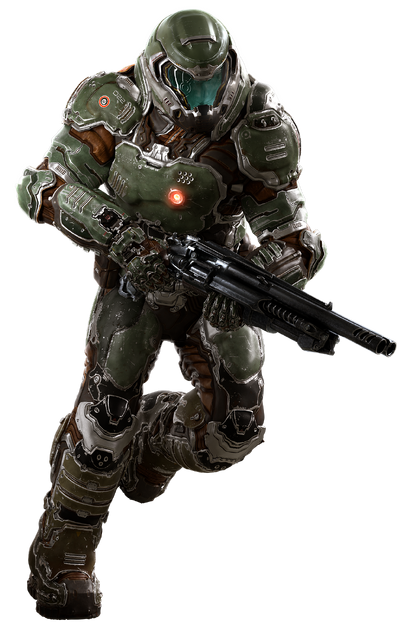 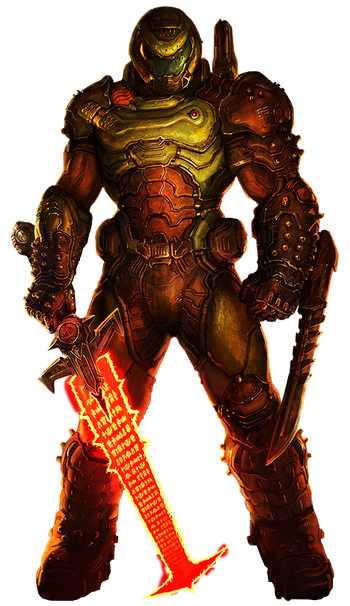 The Doomguy, also known as the Doom marine or Doom Slayer since the 2016 reboot, is the main character of the Sci-fi, Horror, First-Person-Shooter Doom series. He is one of the Earth's toughest and mightiest warriors who single-handedly fights against the armies of Hell. In the ending of Doom 64, he entered Hell and closed the gateway to the living world in hopes the Earth will be saved, at the cost of Doomguy having to fight demons for eternity.

Quake Arena, Quake Champions, and Doom Eternal confirm that the Doom Slayer is the original Doom Guy. The former state that he still carries around hind rabbit's foot made from his rabbit Daisy and includes his bio taken directly from Doom (2016) including the Slayer's Testaments. Doom Eternal tells of Doomguy's arrival on Sentinel Prime from Hell.

Countless centuries later, and through enormous levels of training and battle, he has grown much stronger to the point where even the strongest demons in existence fear him as "The Doom Slayer". Where he yet again fights to save the Post-Apocalyptic world in Doom 2016 and Doom Eternal.

Name: Doomguy/Doom Marine | His real name is possibly B.J. Blazkowicz IV | Referred to as the Doom Slayer in Doom 4/2016 reboot and beyond.

Age: Unknown, appears to be in his late twenties to early thirties | Unknown, likely thousands to billions of years old (Is stated to have been alive for "eons")

Classification: Human, US Space Marine Captain | Immortal Enhanced Human, Former Night Sentinel, Rumored to be a Demon or a God

All previous plus, Immortality (Type 1), Swordmanship Mastery, Double-Jump (with Delta V Jump-Boots. Can also scale walls with ease), Self-Sustenance (Type 1, 2 and 3; Can survive for many years without air, eating, drinking or sleeping), Fire Manipulation with various weapons, Electricity Manipulation with Lightning Gun, Magnetism Manipulation with Gauss cannon (Fires steel flechettes that lock on to targets via magnetism), Pseudo-Flight with thrusters, Illusion Creation with holograms, Speed Amplification with the Haste Sphere, Weapon Amplification with the Quad Damage Sphere (capable of increasing damage output of all weapons by a factor of 4x), Blessed by the seraphim to have increased Power and Speed, Life-Force Absorption against demons (Stated to draw strength from fallen foes.) or Via Siphon Grenade, Paralysis Inducement via the Plasma rifle, Resistance to Madness Manipulation (Type 2. Completely unaffected by regular use of the Berserk Sphere, which leaves normal people in a 'perpetual state of delirium' after a single use), Death Manipulation (The Summoners, whose energy blasts can turn their victims undead against their will were unable to affect him at any point when he was in Hell), Extreme Heat (Praetor armor is stated to be completely immune to everything in the UAC's possession, including a laser that was stated to be over 2 million degrees Kelvin), Possession and Soul Manipulation (Completely immune to the Lost Souls' soul possession, and is capable of tanking their explosive attacks without any energy shields), Mind Manipulation (Resisted Buff Totems and the psychomancy powers), Corruption (Resisted Hell's power), Electricity Manipulation (Shown here)

Same as before. Acrobatics, Ice Manipulation with Ice Bomb, Portal Creation via VEGA, Non-Physical Interaction, Time Slow with Runes, Immortality Type 2 and 4 Negation with the Slayer's Crucible, Resistance to Ice Manipulation (Not injured by Ice Bombs)

Attack Potency: At least Wall level (Capable of killing demons on this level with his bare fists, is also noticeably stronger than his counterpart from DOOM 3), Street level to Small Building level with most weapons, Multi-City Block level with the Berserk Sphere or BFG 9000 (Capable of killing the Cyberdemon with Berserk Sphere, though this takes a fair amount of time to accomplish), higher against demons with the Unmaker | At least Town level, likely City level (Immensely stronger than previous incarnations. Capable of mutilating Super Heavy Tier demons with his bare hands. In-game lore and the writers state that none of the forces of Hell were strong enough to defeat him. Prior to obtaining his Praetor Armor, he fought and killed The Titan with his fists and his weapons. It is also stated he may have gotten much stronger since then), higher with the Berserk Sphere, Wall level to Multi-City Block level with weapons (UAC EMG Sidearm has a 4-megawatt plasma charge; other weapons, especially the BFG 9000), higher with Quad Damage | At least Mountain level+, possibly higher (Defeated the Icon of Sin, Stated to be stronger than before, Broke chains that enslaved Titans couldn't escape from), higher with Blood Punch, Berserk, and the Slayer's Crucible. At least Large Mountain level with Onslaught (Quadruples Damage)

Speed: At least Supersonic (Easily capable of outrunning rockets despite the restrictions of his armor, can dodge machine-generated electricity and plasma weapons with ease), likely Speed of Light attack speed with Unmaker (Fires lasers) | At least Supersonic (Likely much faster than before, can move this fast), higher with the Haste Sphere and Runes. At least Hypersonic attack speed with the Gauss Cannon, likely higher | At least Massively Hypersonic+ Reactions (Faster than Marauders who can react to plasma weapons, can react to the Icon of Sin's Meteors and the Khan Maykr's attacks ), higher with Overdrive, Runes, and Dash.

Lifting Strength: At least Class K (Physically stronger than the Lost Soul), higher with the Berserk (Increases his strength several times beyond normal) | Class M (Far stronger than any of his previous incarnations. Capable of casually ripping out the Cyberdemon's horns and tearing apart the Hell Guard's natural armor with his bare hands. Effortlessly rips of the skulls and spinal cords of Baron of Hell and Hell Guard, who possess dozens of times more mass than that of a human. Overpowered The Titan, who is most likely this big), higher with the Berserk Sphere | At least Class M (Stronger than before)

Striking Strength: At least Wall Class (Can beat demons on this level to death with his bare hands), City Block Class with the Berserk, (He can punch Cyberdemons to death, though this takes a fair amount of time to accomplish) | At least Town Class, likely City Class (Strong enough to smash the Cyberdemon's head in one hit, and physically overpowered the Titan), higher with the Berserk Sphere | At least Mountain Class+, possibly higher (Stronger than before), higher with Blood Punch, Berserk, and the Slayer's Crucible. At least Large Mountain Class with Onslaught

Durability: At least Wall level without his armor (Able to withstand large amounts of gunfire, including bursts from assault rifles and point-blank blasts from a shotgun. Capable of tanking multiple hits from the Imp), higher with the Security Armor or the Soul Sphere (Allows him to tank bursts of chaingun fire and explosions from explosive barrels, as well as multiple rockets from the Revenant), Small Building level with the Combat Armor (Capable of taking numerous hits from the Baron of Hell), at least Small Building level with both the Combat Armor and the Soul Sphere collected simultaneously, City Block level with the Berserk Sphere | At least Town level, likely City level (It is stated that even the strongest demons in hell lack the power to even scratch the Doom Slayer, Praetor armor is also stated to be immune to everything in the UAC's possession; this includes a "2 Megakelvin cutting laser," also tanked the detonation of a minimum 30,000 Megawatt Hour battery as well as the detonation of the Argent Tower which produced more energy than a Nuclear Reactor can produce in 12 months), higher with the Invulnerability Sphere | At least Mountain level+, possibly higher (Stated to be stronger than before. Took attacks from the Icon of Sin), higher with Blood Punch and Berserk. At least Large Mountain level with Onslaught

Stamina: Superhuman. Can survive for a long time without eating and drinking. Is capable of resisting Hell's temperatures, battling for hours on end without rest, and even running at subsonic speeds for extended periods of time without tiring. | Nearly limitless. Rampaged across Hell for "eons" without eating, drinking, sleeping or tiring, and was heavily implied to have been fighting demons the entire time he was there. | Nearly limitless

Intelligence: Gifted. Is one of Earth's toughest, hardened in combat and trained for battle. Can use any conventional tool and armament. Is an excellent military tactician; can come up with attack strategies and adapt on the fly while facing down any threat, and his actions have led to the downfall of numerous demonic invasion plans. | Much greater than before as the Doom Slayer. He possesses countless centuries of combat experience as a result of being trapped in Hell for countless lifetimes worth of years. He had years of Night Sentinel training. As the same Doomguy of the original games, and as such should have all of the same skills further enforced.

Weaknesses: His armor's energy shields don't regenerate and he is weaker without his power-ups and armor. | Armor's energy shields don't regenerate. Apparently takes great pleasure in destroying things, which can sometimes be detrimental to his own success. Berserk renders him incapable of operating firearms during its duration. Most of his weapons are far below his own physical tier, even with Quad Damage active. Powerups only last for a limited time.

The Thing (John Carpenter's The Thing) The Thing's profile (Speed equal, Base Doomguy was used)

Hank J. Wimbleton (Madness Combat) Hank's Profile (Both were 9-A, base forms used)