VS Battles Wiki
Register
Don't have an account?
Sign In
Advertisement
in: Tier 7, Tier 7-A, Danmaku Users,
and 38 more 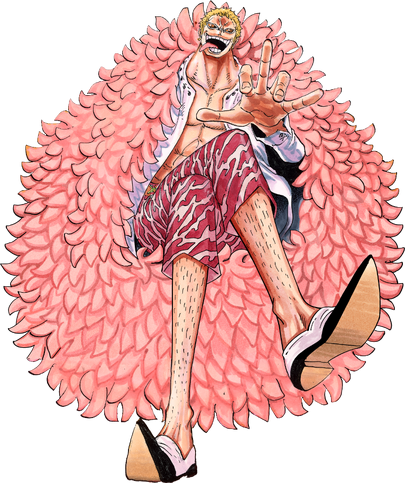 The third of the Seven Warlords to be formally introduced, Donquixote Doflamingo is captain of the Donquixote Pirates and the former king of Dressrosa. Sly, rude and disrespectful towards the World Government, Doflamingo is very sadistic towards others and seems to delight in causing and participating in chaos. However, he is affectionate towards his crew, who in turn all respect him, referring to him as "Doffy".

He has eaten the String-String Fruit (Ito Ito no Mi), which allows him to produce strings and literally manipulate people like puppets, sever limbs with ease, and travel across the sky. He is also one of the few known users of Conqueror's Haki to exist.

Fitting in with his "puppetmaster" motif, Doflamingo works as the underworld's top broker under the alias "Joker", and has many connections, including planting moles in the Marines, selling weapons to countries to provoke war, and formerly oversaw a massive slavery ring that catered towards the Celestial Dragon nobility. His most important partnership is with Kaido, who he keeps happy by producing artificial Zoan Devil Fruits known as "Smileys" to maintain Kaido's beast army. He is a believer in the New Age, an era where pirates focus on what's around them rather than embark on pursuits of romanticism.

After the time skip, his influence is felt starting from the Punk Hazard arc and finally culminates with him becoming the main antagonist of the Dressrosa arc. After a series of long, grueling battles, his pirate crew was defeated, with Doflamingo himself has beaten by Monkey D. Luffy with Trafalgar Law's aid. Due to Issho's actions, the World Government couldn't cover up his activities and had no choice but to strip Doflamingo of his Warlord title.

It has been revealed that he was a former Celestial Dragon before losing his status.

Prior to joining the Warlords, his bounty was 340,000,000 Berries. Since he was arrested immediately following his defeat, it has not been reinstated.

Powers and Abilities: Superhuman Physical Characteristics, Master Hand-to-Hand combatant, Acrobatics, Competent with a flint-lock pistol and can use his feathered coat as a shield, Limited Poison Manipulation (Utilizes lead bullets in his pistol), Haki (Intermediate Haoshoku, Intermediate Kenbunshoku, Intermediate Busoshoku), Thread Manipulation (Via Ito-Ito no Mi), Limited Air Manipulation (Can kick hard enough to create an air wave capable of bisecting three towers), Body Puppetry (By wrapping threads via Parasito, can control the movements of his opponents with his strings by piercing the nape of the neck where the cervical is located), Pseudo-Flight (Via Sora no Michi), Limited Fire Manipulation (Via Overheat), Duplication (Can create a perfect replica of himself to fight alongside him: The Black Knight), Limited Telepathy Negation (His Birdcage has shown the ability to cut off Transponder Snails ability to telepathically communicate with each other), Limited Body Control and Regeneration/Self-Healing (High-Low via Shufuku Sagyo), Transmutation (Capable of converting objects into threads, and control them via Awakening, but has only been shown capable of converting inanimate objects), Afterimage Creation, Danmaku, Resistance to Heat Manipulation (Was unaffected by Sanji's Diable Jambe despite the latter's ability to harm the opponent's bones with it), Ice Manipulation (Thawed himself free from Kuzan's ice), Madness Manipulation, Mind Manipulation and Soul Manipulation via Willpower (Through sheer willpower they can resist losing their mind when absorbing shadows through the Kage Kage no Mi. Shadows belonging to strong willed people are difficult to control, allowing them to rebel against Moria's pact which usually immediately submits a shadow to his supremacy and orders. Spiritual energy is contained within one's soul/life; this energy is represented by the fighting power or the Haki itself. Those with strong souls, which are homologous to shadows, resist the effects of Brook's soul manipulation)

Attack Potency: Mountain level (Consistently drew blood from base Luffy with kicks), Mountain level+ with Ito Ito no Mi (Drew blood from Luffy using Armament Haki with Athlete. One shot Smoker and drew blood from Sanji with Goshikito. His Bullet String went completely through Trafalgar Law's shoulder and he impaled him with Fallbright), higher with Awakening (Despite being physically inferior to Gear 4th Luffy, Doflamingo was capable of pressuring him and held Luffy at bay for over 20 minutes) | Mountain level with Black Knight (Pressured Trafalgar Law, and could hurt and overpower Gear 2nd Luffy)

Lifting Strength: At least Class G physically (Was able to clash with Luffy several times, could hold down Smoker), Class T with his threads (Could restrain Jozu), at least Class T with the birdcage (The combined efforts of Zoro, Fujitora, the Colosseum Fighters, and many more strong fighters were barely capable of stopping his Birdcage. A meteor as heavy as this could not dent the Birdcage and were sliced instead)

Striking Strength: Mountain Class, Mountain level+ with Ito Ito no Mi (He can use his string on top of his kicks to deal more damage) | City Class with Black Knight (Capable of forcing both Law and Luffy back with its attacks)

Durability: Mountain level himself (Casually blocked Sanji's Diable Jambe kicks with no damage. Tanked attacks from Gear 2nd Luffy and regarded his attacks as being "fast enough, but not carrying any weight" despite being previously injured by Law's Gamma Knife), higher with Ito Ito no Mi (A single string is this strong, and he can defend with multiple strings), Mountain level+ with Armament Haki (Although inferior, he withstood several blows from Gear 4th Luffy, who resorted to a stronger attack via King Kong Gun to put Doflamingo down for good), higher with Awakening | Mountain level with Black Knight (Took several hits from Trafalgar Law)

Stamina: Immense (Has displayed monstrous endurance, comparable of that to Monkey D. Luffy. Shrugged off one of Luffy's Red-Hawks, which sent an explosion through his torso, and an injection attack from Law that went through his stomach. Despite both attacks wounding him to some extent, they had no noticeable affect on his fighting ability. Doflamingo stayed conscious after having taken Law's Gamma Knife to his chest, which resulted in an explosion completely destroying all of Doflamingo's organs, sending smoke and blood out of his mouth--fatally injuring him without leaving any exterior wounds. This was then followed up with a kick from Luffy to the same location, and Law electrocuting him, but Doflamingo was capable of standing up merely seconds later despite the damage and pain while only having started patching his organs up with Sufuku Sagyo and continued his fight against Luffy. He shrugged off many attacks after this, and later withstood attacks from Gear 4th Bound Man Luffy and even outmatched Luffy in a battle of attrition, as Luffy fell unable to move due to utilizing Gear 4th too much, while Doflamingo was still capable of fighting with only moderate lapses while Luffy required some time to recover. After all of this, it took the effort of Luffy's strongest attack to keep Doflamingo down--resulting in both passing out. Doflamingo was later seen having a casual talk with Tsuru, only having a bandage on his forehead and being in good condition otherwise [though it is unknown if he woke up soon after his fight with Luffy, or a couple of days after the fight])

Standard Equipment: A pink feathered coat and flint-lock pistol (though he only utilizes the latter in cases where he is about to execute an opponent via humiliation).

Intelligence: A man obsessed with having power, Doflamingo seizes every opportunity for his own personal gain. He is a tactical genius and the head of a worldwide criminal empire, manipulating the royalty of Dressrosa to conquer the country in a single night while retaining widespread popularity as its king, selling black market goods to entities around the world, including two of the Four Emperors without the World Government's knowledge while abusing his position as the king of a nation and a member of the Shichibukai to maintain political immunity. Wily and perceptive, he instantly saw through Trafalgar Law's plan to unseat him as a Shichibukai, planting false information in newspapers and manipulating events to successfully capture Law by pitting him against both an Admiral and Doflamingo himself while trapping Monkey D. Luffy within the Dressrosa's Corrida Coliseum with the promise of the Mera Mera no Mi to keep the Straw Hats from interfering. In battle, he is extremely well-versed in the use of his Devil Fruit, using his threads to quickly repair himself from Law's Gamma Knife despite being brought to the verge of death and going on to prove himself superior to Luffy in hand-to-hand combat and the use of his Devil Fruit, forcing the latter to utilize Gear Fourth to gain an advantage. He is also pragmatic enough to utilize his Birdcage technique as soon as he was outed by the Straw Hats and Law, using monetary rewards and promises of mercy to turn potential enemies against each other and buy additional time for himself. After killing his father at the age of 10, Doflamingo developed psychological damage to the point where he would begin to smile and laugh uncontrollably.

Standard Tactics: Following the theme of his personality and Devil Fruit ability, Doflamingo approaches combat in a mocking, yet shrewd manner. He takes heavy advantage of his opponent's temper, and the range in which he can use his collective abilities.

Weaknesses: Standard Devil Fruit users weaknesses. He has a very pronounced god complex, having a deep-seated arrogance about his self-worth being above others, which, while it does not have a direct affect on his effectiveness in combat, does affect his overall thought process, which can be exploited if approached a specific way, such as when Trafalgar Law revealed his connection to the family of D to surprise and anger him, leaving him open for an attack.

Ito Ito no Mi (String String Fruit): A Paramecia-class Devil Fruit that allows the user to restrain and/or manipulate people with strings, or even use the strings as means to cut through matter or even body parts. The strings can also be used to connect clouds, thus providing air transportation. His individual threads are so thin that the naked eye struggles to even see them without actively searching for their location and may even be perceived as invisible.

Devil Fruit powers can, in rare occasions, be "awakened" (覚醒 kakusei), increasing the abilities of the user. The details of how a Devil Fruit can be awakened are so far unknown, but the increased abilities have been seen to allow significantly more power, as well as new abilities. The effects of the awakening depend on the class of the Devil Fruit.

For Paramecia-class powers, awakening can allow the power to affect even the surrounding, as opposed to the user's body. Donquixote Doflamingo, with the Ito Ito no Mi, is confirmed to have awakened and can transform objects to string as well as augment his main ability to create strings from his own body. He is also shown capable of applying Busōshoku Haki to the threads he creates via the environment.

Superman (Donnerverse) Superman's Profile (Both were High 7-A, speed was equalized)

Charlotte Katakuri (One Piece) Katakuri's Profile (Both start with Awakening)