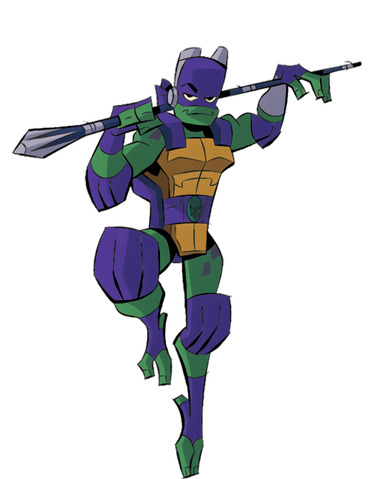 Donatello, or simply Donnie, is a protagonist of the television series, Rise of the Teenage Mutant Ninja Turtles. Just like his other incarnations, He is the brains of the group and is proficient in all kinds of technology and mechanics. Unlike his other incarnations however, he is much more cocky and confident. Not afraid to say what's on his mind or make rash actions.

Attack Potency: Large Town level (Comparable to the other turtles)

Intelligence: Genius; Responsible for creating every single machine that he uses. Skilled with engineering and even created an artificial intelligence in the form of S.H.E.L.L.D.O.N.

Weaknesses: Very cocky and full of himself. Loves to show off and hates it when he doesn't get his way.

Retrieved from "https://vsbattles.fandom.com/wiki/Donatello_(Rise_of_the_Teenage_Mutant_Ninja_Turtles)?oldid=6169196"
Community content is available under CC-BY-SA unless otherwise noted.