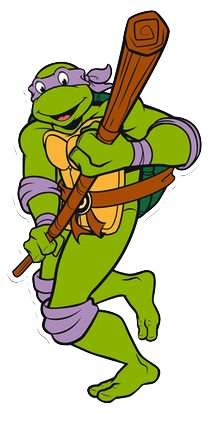 Attack Potency: Wall level (Can tear apart the robots of Kraang which are made of a metal harder and more durable then titanium, pushed a boulder twice as big as him) | Small Town level+ (Implied to have fought a Kraathatrogon, an alien species that can "shake the city", referring to New York City, as well as a being that's ludicrously stronger than Casey Jones, who hurt Ho Chan) | At least Town level (Physically comparable, if less skilled, than an alternate timeline incarnation of himself, who in turn is comparable to Raphael, who was said to be able to shatter mountains by the Ninja Tribunal)

Durability: Wall level (Can jump off a building and survive with no injuries at all) | Small Town level+ (Should've taken hits from the Kraathatrogon) | At least Town level

Retrieved from "https://vsbattles.fandom.com/wiki/Donatello_(1987)?oldid=6003882"
Community content is available under CC-BY-SA unless otherwise noted.