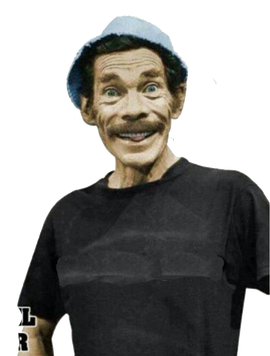 Don Ramón is a 50-year-old widower who, according to him, lost his wife in the delivery of his daughter, Chilindrina. Lives in the neighborhood next to her in the apartment No. 72, although in one of the first episodes lived in the apartment of Doña Florinda (No. 14).

Throughout Don Ramon's life he has different trades (or at least he says he had them), For example he was a boxer, football player, bullfighter, guitarist, singer, master builder, etc. Recurrently he performs daily jobs, such as plumber (plumber), shoemaker, carpenter, plasterer (escoliasta), balloon salesman, mechanic, churros salesman, hairdresser, junkie, milkman, among others.

Despite his gruff lanky appearance he is nevertheless charismatic and of good heart but with an explosive character. According to Roberto Gomez Bolaños and Carlos Villagran, the main character of Chavo del 8 and the axis of the plot was Don Ramon.

Superhuman Physical Characteristics, Weapon Mastery (A Winchester Rifle and a bullfighter's rapier), Skilled in Hand to Hand combat (He was a Boxer at one point in his life, In the episode "Don Ramon, Boxeador." Stated himself that he was quote: "The champion of the neighborhood in the years of 19--something! Featherweight is what they used to called me! But I sure did hit like a mule!", while also claiming he once won the championship crown, photos provided of his time boxing despite his seeming losing grace in the last photo he was able to teach said lessons to El Chavo.), Stealth Mastery, Breaking the Fourth Wall, Toon Force (As shown here) and Resistance to Electricity Manipulation (Survived being electrocuted as shown here)

Same as before with, Superhuman Physical Characteristics, Vehicular Mastery, Resistance to Fire Manipulation

Speed: At least Peak Human to Superhuman travel speed, Reactions, And combat (Don Ramon claimed he was once a Boxer in his lifetime even going by far to state he won the Championship Crown once provided that at least he has photos evidencing his career in boxing despite his seeming lose in grace in the last photo and despite this he has been able to teach said lessons to Chavo, Boxers of which via scaling to real life ones can punch at 15 Meters per second.) Supersonic attack speed with rifle (Winchester Rifles can go at 759 m/s and many rifle cartridges could easily go over 700 m/s during the 1890s.) | At least Superhuman travel speed and reactions (Keep up with a car)

Lifting Strength: Peak Human | At least Class 5 (Should be comparable albeit roughly to Dona Florinda.)

Intelligence: Average. Sometimes Don Ramon is wrong in the pronunciation of words and lacks some basic school knowledge. But he is still considered an intelligent and versatile person in different situations as he has knowledge as a bullfighter, guitarist, singer, master builder, mechanic among other things.

Weaknesses: Don Ramon can at times have a lot of bad luck.