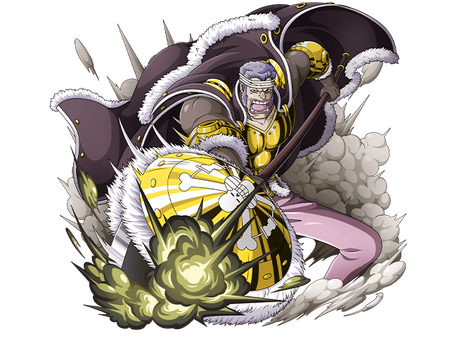 Don Krieg is the captain of the Krieg Pirates and an infamous pirate of East Blue. Because of his underhanded methods and domination over a fleet of 50 pirate ships, he is infamously known as "Foul-Play" Krieg and "Pirate Fleet Admiral" and is supremely confident in the weapons of his large arsenal.

Speed: Hypersonic+ (Kept up with Luffy)

Lifting Strength: Class M (Was able to toss a ship a large distance)

Durability: Large Building level+ (Took multiple hits from Luffy, and stood back up even after their fight had finished)

Standard Equipment: His armor, which conceals many weapons, such as machine-guns that fire sharp bullets, has a spike - covered cape and a shield for defense, the shield can also be converted to fire MH5 (poison gas canisters), he has diamond knuckle weapons for melee combat, and a spear with bombs built into it so it will create an explosion every time he hits something with it. He also commands a fleet of over 50 ships with over 5,000 pirates (at least, until Mihawk destroyed all of his ships and killed most of his crew)

Intelligence: Don Krieg is an effective leader, good at trickery and deception, not above fighting dirty and decent battle tactician.

Weaknesses: Don Kreig has a temper and has great overconfidence in his weapons and armor.