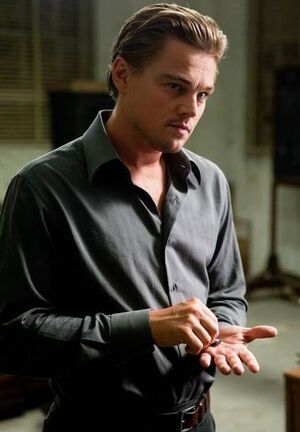 Dominick "Dom" Cobb is well known in the black market because of his level of expertise in the field of extraction, which consists of stealing his mark's ideas by infiltrating their dreams and stealing valuable information from them. Wanted as a fugitive for being falsely implicated for the death of his wife, Mal, Cobb is unable to return to his home.

Age: Likely in his thirties physically, at least in his eighties mentally

Attack Potency: Athlete level (Can fend off professional hitmen in a few hits) | Street level (Superior to his real-world counterpart. Can knock out professional bodyguards in a single hit), Unknown with Reality Warping (Folded a city onto itself and created a train, but the full extent of his capabilities aren't explored.) | Unknown (Created an entire city with assistance from Mal, and can supposedly create in an infinite space)

Stamina: Above average (Ran for extended periods of time) | Unknown

Intelligence: At least Gifted (Is considered to be the best extractor in the business. Is an extremely talented architect, social influencer and psychoanalyst)

Weaknesses: Normal Human Weaknesses. Is emotionally traumatized due to the death of his wife, cannot dream and cannot tell the difference between the real world and dream world without his totem | If heavily sedated, the user can enter into limbo upon death | If one doesn't enter limbo by themselves, they'll not be aware of their predicament

Key: Real World | As a dreamer | In Limbo

Retrieved from "https://vsbattles.fandom.com/wiki/Dominick_Cobb_(Inception)?oldid=6501113"
Community content is available under CC-BY-SA unless otherwise noted.