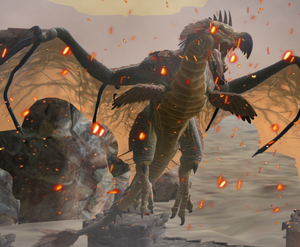 Speed: Subsonic (Via sheer size, comparable to the Dragon)

Lifting Strength: Class M (Comparable to bosses such as the Megapithecus)

Striking Strength: At least Multi-City Block Class (Superior to the games other bosses)

Durability: At least Multi-City Block level (Stronger than other Bosses, comparable to the Dodorex)

Stamina: High (Can fight with other bosses for long periods of time)

Retrieved from "https://vsbattles.fandom.com/wiki/Dodowyvern?oldid=6039122"
Community content is available under CC-BY-SA unless otherwise noted.