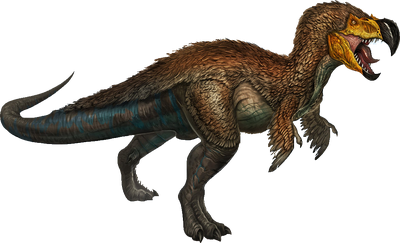 The Dodorex is a creature from the game Ark: Survival Evolved, first appearing in the event Fear Evolved. When first introduced this creature was the strongest in the game, even surpassing the games bosses, since then it has been overcome by the Titans.

Attack Potency: At least Multi-City Block level (Far stronger than bosses such as the Dragon)

Speed: Subsonic travel, reaction and combat speed (Via size, comparable if not superior to the Dragon)

Lifting Strength: Class M (Comparable to bosses such as the Megapithecus)

Striking Strength: At least Multi-City Block Class (Superior to bosses such as the Dragon)

Durability: At least Multi-City Block level (Can take hits from the games bosses)

Stamina: High (Can fight bosses for long periods of time)

Weaknesses: It cannot breath fire when in water

Retrieved from "https://vsbattles.fandom.com/wiki/Dodorex?oldid=6040924"
Community content is available under CC-BY-SA unless otherwise noted.