VS Battles Wiki
Register
Don't have an account?
Sign In
Advertisement
in: Variable Tier, Tier 6, Tier High 6-C,
and 76 more 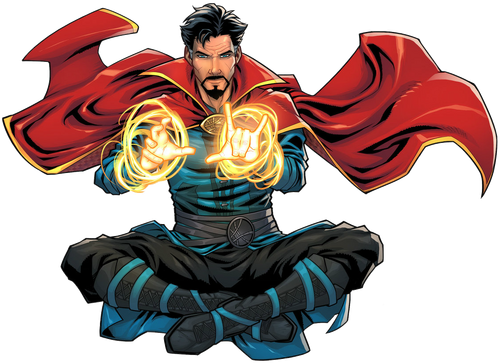 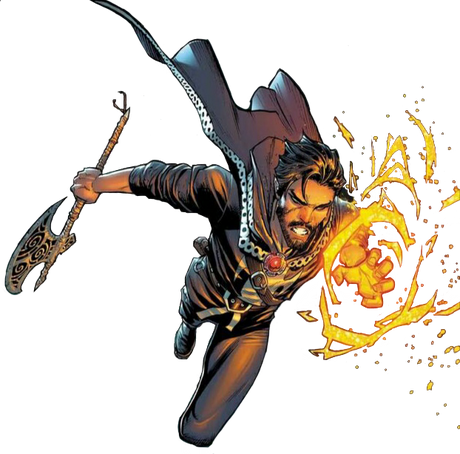 Stephen Vincent Strange is the Sorcerer Supreme of the Earth Dimension. Once a materialistic and greedy neurosurgeon, Strange's medical career was left in pieces after a debilitating car accident which severely damaged the nerves of his hands and made him unable to ever conduct an operation again. Consumed by his own pride and self-pity, he started conducting several medical procedures on himself, many of which highly experimental, in a desperate attempt to return to his former glory, which all gave off no significant results and ultimately exhausted all of Strange's fortune over the course of a few months, reducing him to nothing but a derelict roaming around New York's streets.

Eventually, Strange took notice of stories about a Tibetan monk, going by the title of the Ancient One, which was rumored to possess magical powers capable of healing any disease. Being desperate enough to try anything in order to heal his hands, he travelled to the Tibet and met up with the Ancient One in a palace sitting upon isolated, icy mountains, and although haughty and filled with skepticism at first, Strange's introduction to the world of the supernatural humbled his personality, and eventually sparkled him into becoming a disciple of the Ancient One, ultimately resulting in him taking up the mantle of Sorcerer Supreme held by his master, and becoming Earth's primary defender against the supernatural forces which roam beyond normal reality.

Tier: Varies, High 6-C to 2-A, possibly Low 1-C with Artifacts and Spells

Superhuman Physical Characteristics, Immortality (Types 1 and 3. Has evolved past aging after overcoming Death's trials and christening himself as the Avatar of Eternity), Martial Arts, Weapon Mastery, Magic, Enhanced Senses (Strange's senses are both physically and magically attuned, and are thus capable of quickly detecting magical phenomenon and events, including things such as distortions in space and tume), Clairvoyance (Through the Eye of Agamotto, he can peer into, and observe events happening in other planes of existence altogether, as well as different points in time and space), Psychometry, Levitation, Astral Projection, Forcefield Creation, Invulnerability with certain Spells, Teleportation, BFR (Through an incantation, he banished a living, demonic house to another space-time continuum, and later hurled Baron Mordo throughout the far ends of the universe. Sent the Silver Dagger to the dimension of unreality through the Eye of Agamotto, and banished D'Spayre to another plane of reality with the Crimson Bands of Cyttorak), Spatial Manipulation, Telekinesis, Telepathy (Strange's psychic power is enough to overpower Umar in a telepathic battle, pushing her abilities to their limits while in the Dark Dimension, where her power was at its peak), Fusionism (Can merge with Eternity through the Eye of Agamotto, and could fuse himself to Arioch, gaining his power and physical traits), Higher-Dimensional Existence (While merged with Eternity), Summoning (Can summon Hell Lords such as Satannish, and extremely powerful Cosmic Entities such as Lord Chaos and Master Order, as well as channel their power), Reality Warping, Matter Manipulation, Size Manipulation, Fire Manipulation, Transmutation, Water Manipulation, Energy Manipulation, Sound Manipulation (Capable of generating "sound beyond the very fabric of sound itself" in the form of waves of overwhelming energy which can make the likes of Baron Mordo reel in pain), Soul Manipulation (Forcibly took Mordo's astral form out of his body), Time Manipulation and Time Travel (Sent Mordo's astral form backwards through time itself), Time Stop (Caused the flow of time to cease across the entire planet), Mind Manipulation, Memory Manipulation, Sleep Manipulation, Empathic Manipulation, Power Nullification (The Eye of Agamotto is capable of swallowing opposing spells and reducing them to nothingness. Can enclose his foes in a bubble which negates all magical abilities. Nullified a temporal anomaly created by Yandroth), Power Absorption, Portal Creation, Dimensional Travel, Sealing, Necromancy, Non-Physical Interaction (Magical attacks and spells can affect and completely destroy spirits and astral forms), Attack Reflection (Redirected Borgo's power cosmic against him), Regeneration (Low-Godly. Reformed his own physical form after both Dormammu and Strange shattered each other's essences across multiple realms), Pocket Reality Manipulation (Created a "null space" which ran parallel to space-time itself, where constants such as space, direction and dimensionality where under his full control), Weather Manipulation, Possession, Gravity Manipulation, Perception Manipulation, Illusion Creation (Imprisoned a drunk, casual Beyonder within a veil of illusion, and could have kept him there for all of eternity. His illusions can fool even powerful Demons such as Arioch), Dream Manipulation (Can enter someone's dream to fight their horror), Light Manipulation (Can emanate a light beam with his amulet), Paralysis Inducement (Paralysed a group of people until he was gone), Smoke Manipulation (Cast a mist spell), and Life Force Absorption (Absorbed a demon's life-force), Life Manipulation (Can absorb life force and turned bullets into flies[1]), Air Manipulation (Created a tornado[2]), Resurrection (Resurrected Dead Girl), Immersion (Entered a dream with an astral projection), Animal Manipulation (Can turn things into flies, and conjured several bees to free him of honey)

Resistance to Reality Warping, Spatial Manipulation (Resisted Stygyro's attempt to collapse him into a 2-dimensional form and shatter his body across space, merging himself back together with an incantation), Time Manipulation (Shattered a time loop with the Eye of Agamotto), Void Manipulation (Broke free of Zom's maze of mandess, which was reducing him to a "nameless, shapeless nihility", and resisted a casual Dormammu's existence erasure), Transmutation (Could withstand the attempts of an empowered Oniri to transform his body into vapour), Death Manipulation, Disease Manipulation, Madness Manipulation (Managed to regain his sanity after being driven to the brink of madness by The In-Betweener's onslaught. Kept his lucidity and senses intact after witnessing the rebirth of the universe, which drove Baron Mordo to a stupified, catatonic state where he was unable to rationalize or produce coherent thoughts), Radiation Manipulation (The Eye of Agamotto protects him from all radiation), Illusion Creation and Fear Manipulation (Dispelled D'Spayre's illusions, which could produce a fully-functional replica of the world where Doctor Strange was just a fictional character, and later recovered from his touch of fear, which was implied to have instantly driven many others to insanity in the past), Soul Manipulation, Sealing (Freed his astral form after Nightmare sealed it away with a spell "powerful beyond imagining"), Mind Manipulation (Resisted and fought back against Umar's mental assault), Possession (His body cannot be possessed or controlled by wandering spirits), and Fire Manipulation (Was undamaged by a fire/boiling pit with his cloak).

Attack Potency: Varies, Large Island level (In the dimension of unreality, he easily defeated clone versions of The Hulk, Namor and Black Bolt. Blasted away the Wrecker and was capable of fending off hordes of Mindless Ones) to Multiverse level+, possibly Low Complex Multiverse level with Artifacts and Spells (Capable of channeling the power of, and summoning Cosmic Entities such as Lord Chaos and Master Order, having done so in order to overwhelm and imprison The In-Betweener, and can unite with Eternity himself, causing him to become “one-with-all” and feel in many more dimensions than four. Could forcibly merge himself with the demon Arioch - who claimed to be "not even finite" and completely dwarfed Mephisto and Satannish in power and scope, rendering them akin to "mice in a great temple" - allowing him to fight evenly against Shuma-Gorath. Temporarily achieved a balance of power against The Infinity Gauntlet by using the combined power of every single magical artifact in his possession)

Speed: Massively FTL+ (Comparable to the Ancient One, who reacted to Umar's Bolt of Bewilderment in a microsecond, and Baron Mordo whose power was used to fuel an incantation which sent him hurling across countless dimensions, at a speed which "defies mortal calculation". With the Scroll of Watoomb, he could instantly return after Adam Warlock sent him to the edge of the universe through the Infinity Gauntlet), higher in Astral form (Astral forms are faster than their owner's physical speed). Omnipresent state of existence across the universe by uniting himself with Eternity

Lifting Strength: At least Class Z (Even after becoming exhausted due to fighting in Hell for over two days and being nearly driven insane, Doctor Strange still had enough magical power to make an entire moon rise and explode), likely far higher (Could telekinetically hold and manipulate the black hole resulting from Stygyro's star-form exploding into a supernova, hurling it at the Wheel of Change)

Striking Strength: Street Class (Stated to have greatly developed both his muscle power and fighting skills as part of his sorcerer training, and could skillfully fight against a group of mind-controlled thugs before being overwhelmed by numerical advantage), far higher through certain Artifacts and Magic

Durability: Street level physically (Capable of enduring beatings from physically comparable opponents, such as replicas or alternate versions of himself, and didn't receive any notable damage after being knocked out by a lead pipe to the head). At least Solar System level with Forcefields (The Crimson Bands of Cyttorak defended his physical body from a supernova at point-blank range. Can protect himself against the power of comparable enemies, such as The Demon and Baron Mordo, and hold back the power cosmic of Borgo, a perfect clone of the Silver Surfer created out of the latter's own energy. His invisible, automatic shields can protect him from Voltorg's atomic lightning, which was claimed by Yandroth to have the power to "hurl stars from their paths", only leaving him stunned due to the impact of the blast). Up to Multiverse level+, possibly Low Complex Multiverse level with certain Artifacts and Spells (Capable of uniting his being with Eternity through the Eye of Agamotto, and vastly increase his magical abilities by merging with, or drawing power from beings as powerful as Arioch and Shuma-Gorath. Capable of imbuing his magic with the power of Cosmic Entities such as Lord Chaos and Master Order, allowing him to stand up to, and even overwhelm the likes of The In-Betweener)

Stamina: Extremely high. Possesses vast reserves of magical power, and is capable of fighting for days on end and while being on the receiving end of several attempts at striking down his sanity.

Range: At least Planetary, up to Multiversal+, possibly Low Complex Multiversal with his most powerful spells / artifacts.

Standard Equipment: Normally carries with him the Cloak of Levitation and the Eye of Agamotto, as well as countless magical artifacts which he has amassed during his long time as Sorcerer Supreme, up to and including the Soul Gem itself.

Intelligence: At least Genius. The most powerful sorcerer in his universe, fought for thousands of years in a magical war, created his own forms of magic and mastered nearly every single one of its forms present across existence. The leading authority on magic and mystical related subjects, highly skilled in hand-to-hand combat, and possesses a vast amount of experience regarding nearly every conceivable type of foe.

Discord (My Little Pony) Discord's Profile (Doctor Strange's did not have his summons up to 2-A, and speed was equalized)