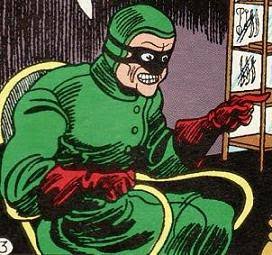 The first Doctor Poison was Maru, a Japanese princess, member of the war-time Villainy, Inc. and opponent of Wonder Woman. She used chemicals as weapons, and initially disguised herself as a male using a disturbing mask.

According to her granddaughter, the second Dr. Poison, Maru died when she was contaminated with a chemical that reversed her age until she disappeared.

Gender: Female, under the disguise of a male

Intelligence: Extraordinary Genius (Is the head of the Nazi Poison Science Division, and can craft poisons that can control the mind, or even disable technology)

Retrieved from "https://vsbattles.fandom.com/wiki/Doctor_Poison_(Golden_Age)?oldid=5985314"
Community content is available under CC-BY-SA unless otherwise noted.