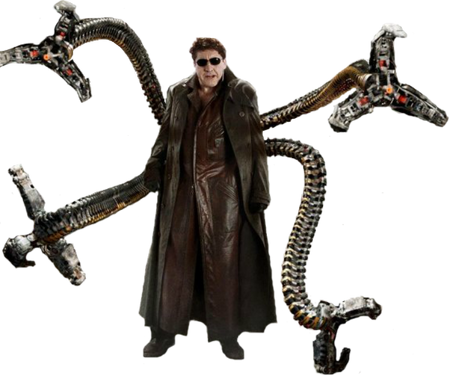 A scientist and Peter's role model, Dr. Otto Octavius goes insane after his failure to create a self-sustaining fusion reaction. Becoming bonded with his handling equipment, four artificially intelligent mechanical tentacles, Octavius sets out to recreate the reaction, at any cost required, being dubbed as Doctor Octopus, or simply Doc Ock.

Tier: 9-A. Far higher, possibly Low 7-B with the protostar nuclear reactor

Speed: Subsonic with Supersonic combat and reaction speeds (Kept up with Spider-Man)

Durability: Small Building level+ (Can take hits from Spider-Man) far higher for his tentacles (Were unable to be damaged by Spider-Man, could interact with a protostar)

Intelligence: Likely Extraordinary Genius (Created the tentacles and the protostar nuclear reactor. Has a PhD.)

Weaknesses: Octavius is being manipulated by his tentacles to commit crimes, and becomes deeply regretful of his actions when confronted.

Retrieved from "https://vsbattles.fandom.com/wiki/Doctor_Octopus_(Raimi_Spider-Man_Trilogy)?oldid=6078480"
Community content is available under CC-BY-SA unless otherwise noted.