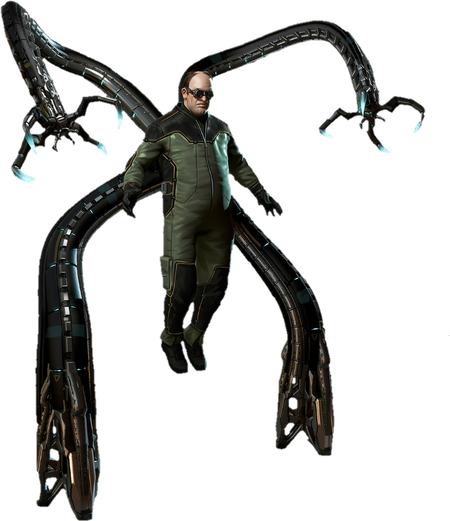 Otto is a friend and mentor of Peter Parker and secretly aware of his activities as Spider-Man. Peter serves as his lab assistant at Octavius Industries, which relies on grants. There, he and Peter are on the verge of perfecting advanced prosthetic limb technology, motivated by a neurological disorder Otto is developing.

Speed: Massively Hypersonic+ (Can receive neural signals faster than a nanosecond. Is able to keep up with Spider-Man)

Durability: Possibly Large Building level (Can endure punches from Spider-Man, though Spider-Man may be holding back)

Stamina: Above Average (Kept fighting in the rain for a long time.)

Intelligence: At least Genius (Developed his Mechanical Arms, albeit with assistance from Peter, made the new Spider-Man suit and gadgetry, and is a criminal mastermind)

Weaknesses: Suffers from a degenerative neurological disease. Is prone to violent outbursts, and tends to overlook flaws when developing technology.