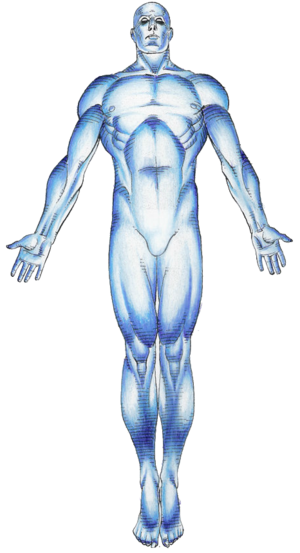 Dr. Jonathan Osterman was a nuclear physicist who transformed himself into a blue-skinned, radiated being after disintegrating himself in an Instrinsic Field Subtractor, and later reconstructing himself. Following his reanimation, he was named Doctor Manhattan and pressed into the service of the United States government.

Speed: Immeasurable, Omnipresent across Space-Time (Exists in all universes simultaneously and perceives all of the past, present, and future as one)

Intelligence: Immensely High. Processes information far faster than any ordinary human, can perceive events so infinitesimal that they practically don't exist, exists in all universes, and experiences the past, present, and future simultaneously

Weaknesses: Tachyons obscure his perception of past and future. He is unable to actively change his own destined future.