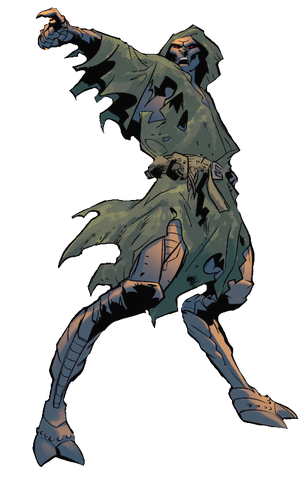 Victor Van Damme was the Latverian classmate of Reed Richards. They worked together on Reed's Negative Zone project. He, however, messed up on the calculations resulting in Reed, Sue, Ben, Johnny and himself becoming mutated. After the event, he was changed into a being with metallic skin. He began to hate the others, believing that it was their fault. It because of this that he became Doctor Doom.

Attack Potency: Mountain level (Easily ripped off the arm of the zombified version of the thing who should be comparable to the regular Thing)

Intelligence: At least Extraordinary Genius (Holds a mastery in both arcane and scientific disciplines and can create technological wonders with extremely limited resources. Has bested Reed Richards at moments and is an extremely skilled politician and strategist)

Weaknesses: Is extremely egotistical and begrudging.