VS Battles Wiki
Register
Don't have an account?
Sign In
in: Characters, Male Characters, Comic Book Characters,
and 68 more 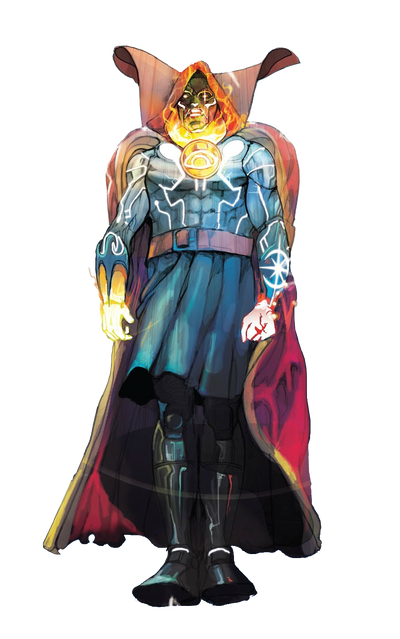 Victor von Doom's history seemingly mirrors his mainstream counterpart's history up to the point King Loki completely wiped out humankind to make his brother Thor suffer. Doom survived humankind's destruction and - seeking to obtain the powers of the prehistoric Avengers for himself - augmented himself with the Starbrand, Iron Fist, the Eye of Agamotto and Cloak of Levitation, and a Spirit of Vengeance - effectively making him a god and enabling him to survive for eons. When All-Father Thor and his granddaughters restored life to Earth, Doom chose to return to Earth to conquer it.

Powers and Abilities: Possesses all the powers of Doctor Doom, Ghost Rider, Iron Fist, and Starbrand

Superhuman Physical Characteristics, Immortality (Types 1, 3, and 8. Has evolved past aging after overcoming Death's trials. The Spirit of Vengeance is a part of God's power, and will be revived by God should he die but still be needed), Regeneration (At least High-Mid), Genius Intelligence, Longevity, Weapon Mastery (Master Swordsman), Martial Arts (Master martial artist), Enhanced Senses (Has superhuman hearing and can perceive the interaction of individual molecules, as well as identify all lifeforms in his vicinity, detect energy signatures, see through solid materials and clearly see things as far away as Earth's moon, adjust his cosmic hearing to hear people talking next door or to the point of sensing Cosmic background radiation), Cosmic Awareness, Magic, Flight (Both on his own and with the Cloak of Levitation), Spaceflight, Forcefield Creation, Electricity Manipulation, Energy Manipulation, Energy Projection, and Absorption (Can absorb energy, be it life force, Chi, nuclear explosions, magic, etc, and had the potential to absorb the Phoenix Force. Can fire Chi Blasts, infuse objects with Chi, Can reduce his body's energy to almost zero), Age Manipulation, Ice Manipulation, Magnetism Manipulation (Can reverse his armor's polarity to create a magnetic field as well as flow his Chi through Electromagnetic Currents, affecting magnetism), Mind Manipulation (Can attack people's minds and mind control them with the Penance Stare and can control minds with Hypnotic Fist, can read minds and meld them together, can hypnotize others through eye contact, and use hypnosis to disable powers. Mind controlled Goom, Fin Fang Foom, Monstrom, and Gorgilla into becoming his heralds), Invisibility, Reactive Evolution, Teleportation, Time Travel, Dream Manipulation, Fire Manipulation, Hellfire Manipulation, Soul Manipulation, Illusion Creation, Portal Creation, Summoning (Can summon other Ghost Riders, can summon legions of demons and Mindless Ones), Telekinesis, Transmutation, Clairvoyance (Through the Eye of Agamotto, he can peer into, and observe events happening in other planes of existence altogether, as well as different points in time and space), BFR (Can send people back in time with his own power as well as send them to alternate realities Via the Eye of Agamotto), Fusionism (Can merge with Abstracts through the Eye of Agamotto), Power Nullification (The Eye of Agamotto is capable of swallowing opposing spells and reducing them to nothingness), Time Manipulation (Can shatter a time loop with the Eye of Agamotto), Chi Manipulation, Healing (Can passively heal fatal wounds nearly instantly, cleanse his body of fatal poisons, cure diseases like Cancer, etc as well as heal others), Resurrection (Can resurrect passively as well as actively resurrect using his Chi to give his spirit a physical body, and can resurrect others with the Starbrand), Matter Manipulation (Able to manipulate his Chi to give his spirit a physical body again), Aura (Able to project his Chi as a defensive aura), Empathic Manipulation (Can broadcast his own feelings in order to influence other people and animals emotions psionically), Telepathy, Self-Sustenance (Types 2 and 3), Pain Manipulation (Can make people suffer proportionate punishment for their sins people with the Penance Stare), Size Manipulation (Can grow in size), Statistics Reduction, Possession (Can possess people who try to absorb his powers), Pocket Reality Manipulation, Explosion Manipulation

Stamina: Extremely High (His stamina is vastly superior to the stamina of his Earth-616 counterpart. Fought Old King Thor wielding the Phoenix Force for 99 years straight)

Intelligence: Supergenius (Possesses all of the knowledge and intellect of his Earth-616 counterpart as well as several hundred millennia worth of experience using all his newfound powers across the universe)

Weaknesses: Will cease to exist if his Earth 616 counterpart is killed.