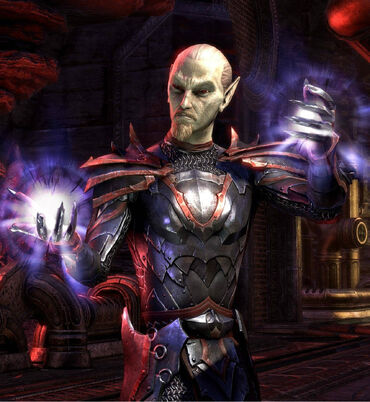 Divayth Fyr is an ancient and renowned Dunmer Sorcerer of House Telvanni. He is perhaps the most powerful living mage in Tamriel, and is currently over 4,000 years old, having originally been born as a Chimer in First Era Tel Aruh. He is a former member of the Psijic Order, having left the reclusive mages of Artaeum due to differences in ideology and ambitions. He is one of the few close friends of the ALMSIVI God Sotha Sil, having studied and fought alongside the tribune when he was still a mortal. During the mid Second Era, Divayth Fyr played a key role in stopping the Daedric Prince Nocturnal from consuming the Clockwork City, having aided The Vestige in the rescuing of Sotha Sil's soul.

In his later years, Divayth Fyr grew eccentric and reclusive, choosing to stay away from Dunmeri Politics despite his esteemed position as the oldest living member of House Telvanni. Instead, the Archmage preferred to live in isolation in his tower of Tel Fyr in Zafirbel Bay, along with his four "daughter-wives", Alfe, Beyte, Delte, and Uupse Fyr, who are all actually genetically modified clones of himself. When Dagoth Ur's spread his Blight throughout Morrowind, Divayth became fascinated with the Corprus Disease, and spent day and night trying to develop a cure by studying its effects on many patients, among them Yagrum Bagarn, the last living Dwemer. Fyr was ultimately successful in his studies, crafting an experimental potion for The Nerevarine which permanently removed all negative effects of Corprus, though maintained its benefit of immortality.

Attack Potency: likely Low Complex Multiverse level, possibly higher (In his Prime, Divayth Fyr was stated multiple times to possess powers bordering on the Divine, with his Soul emitting enough magical energies to be instantly detected by Nocturnal as soon as he entered her realm, and being imprisoned by her as he was perceived as a potential threat. However, he was capable of easily breaking free from her imprisonment and hold off her manifestation from consuming the Clockwork City. Claimed to be capable of defeating Daedric Princes inside of their own realms, albeit with extreme difficulty. As such, he should at least be comparable to Daedric Demiprinces, such as Fa-Nuit-Hen.) | Universe level+ (Easily overpowered and banished Sheogorath's Avatar from the Mundus during the Trial of Vivec, and is stated by the later to be one of the few mortal wizards capable of accomplishing such a feat. Even when old and far from the power he possessed in his Prime, Fyr is still said to be the most powerful Mage in Morrowind, being surpassed only by Divine Beings such as Vivec, and standing as an extremely respected and high-ranking member of House Telvanni, to the point that he could earn a place in the High Council simply by asking, and being far above the likes of Neloth and similarly powerful Mages)

Durability: Unknown. Low Complex Multiverse level with Magic (Far above Psijic Mages such as Ritemaster Iachesis, who could create magical wards powerful enough to protect him from the combined powers of Mephala and Clavicus Vile. His protective barriers should have comparable strength to his own raw power) | Unknown. Universe level+ with Magic

Range: High Hyperversal (Capable of freely traversing the infinite-dimensioned void of Oblivion, and should be far above Psijic Mages who can travel to realms beyond Aetherius and outside of Time at will)

Standard Equipment: Various magical artifacts gathered throughout thousands of years exploring Tamriel and the realms of Oblivion, as well as several Dwemer contraptions and a set of Daedric armor.

Intelligence: Extraordinary Genius. Holds millenia of magical and occult experience, having travelled throughout all of Nirn and the realms of Mundus and Oblivion which exist beyond for several thousands of years, gathering secret and forbidden knowledge among his travels, including secrets related to the true nature of reality and the Aurbis as a whole. Considered worthy to join the ranks of the Psijic Order, and his magical power and knowledge have only increased since his depart from it, with him eventually becoming a highly regarded member of House Telvanni, one who could earn a place in the High Council simply by asking. 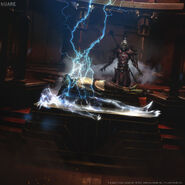