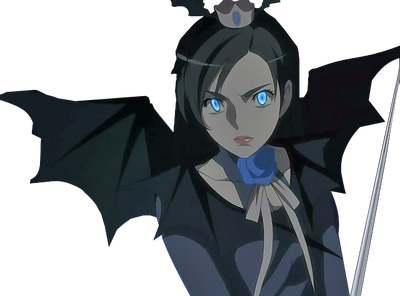 Diva (ディーヴァ, Dīva) is the main antagonist of Blood+ and is the younger sister of Saya. She is the greatest sworn enemy of the Red Shield and, like Saya, is a pure blooded Chiropteran queen born from the Chiropteran Mummy.

Name: Diva, The Diva of the Century, The Singing Diva

Powers and Abilities: Superhuman Physical Characteristics, Immortality (Type 1 and 3), Regeneration (Low-Mid, likely Mid; chiropteran children were shown to regenerate parts of their head blown off), Enhanced Senses (limited Clairvoyance and can sense the presence of other chiropterans), Pain Suppression, Blood Consumption (can drain blood from others via her fangs and power boost from feeding on blood), Poison Immunity, Possesses a telepathic connection to chiropterans, Blood Infusion and Weaponry (can infuse her sword for Haemokinetic Combat), Mutation Inducement (able to heal others with her blood which also leads to creating Chevaliers and granting powers much like her own), Poisonous Blood (her blood causes humans who intake it to die) and Blood Solidification (her blood causes her sister Saya and all chiropterans created by her, directly or indirectly, to crystallize and die), pseudo-Flight, Cocoon Generation for Hibernation, Limb Reattachment, Supremely skilled in swordplay, Shapeshifting (including Vocal Replication), Telekinesis, Has Supernatural Blood, Can psychologically overwhelm her opponent, potential Berserk Mode, Can control, awaken and attract chiropterans with her voice

Attack Potency: At least City Block level (Is much stronger than Saya and her chevaliers, defeated and nearly killed Solomon after a short time with him having grave injuries while she sustained none whatsoever[1], may well be the most physically powerful character)

Speed: At least Hypersonic (Is much faster than her chevaliers, blitzed Solomon)

Stamina: Superhuman; can fight for prolonged period of time even with heavy injuries

Range: Extended melee range with small sword, much higher via telekinesis and singing

Standard Equipment: Diva does not usually use any weapons (since she does not require any). But she is shown to wield a longsword during her final battle with Saya where something was required to cut and inject her blood into the opposing queen.

Weaknesses: Her sister saya's blood causes her to crystallize and die, her blood will lose its crystallizing potency if/when she conceives children, enters periodic three-decade-long hibernation periods, when said hibernation periods draw near, may suffer from fainting spells and her healing factor is weakened, needs to drink blood to stay healthy, taking out the heart completely from the body and crushing it, incineration or decapitation can kill her, desires a family

Strength: Diva has enhanced strength due to her being a chiropteran queen. Even a chevalier is likely to face mortal wounds if she attacks. It is affirmed by Nathan when he sees Diva beat Solomon for daring to try hurt her and her children. In fact, she may well be the most physically powerful character in Blood+, as she is the only chiropteran queen who feeds freely on blood. At one point she throws Saya through the wall of the Zoo tower while holding Riku with enough brute strength that the impact upon Saya's subsequent landing causes the ground to cave in beneath her.

Speed: Diva shows to be highly agile to the point that it can seem that she can teleport. Her speed stirs up fear as shown when she attacked the Red Shield HQ. Diva is fast to the point that it is nearly instantaneous and her movements (when perceived) are depicted as a blur: after knocking Saya through the wall of the tower, she appears seemingly out of nowhere next to Lewis. She is also able to evade Hagi's attack when he throws his cello case at her as she prepares to kill Saya, and reappears moments later next to Solomon.

Flight: Diva can perform long distance jump similar to flight if considered the way Saya jumps. She rarely uses it since she likes to rely on her chevaliers to take her wherever she wants.

Telepathy: Diva shows this ability communicating with chevaliers if necessary. But mostly she uses it to find Riku on Red Shield ship. She listens to his heartbeat and follows it. Diva possibly possesses a telepathic connection to Saya and vice-versa as she is shown to be capable of verbally communicating with Saya without knowing how to speak, and could have utilized this to match Saya in swordplay at the opera house, as she did not appear to have much experience beforehand.

Telekinesis: Diva is implied to be telekinetic; she shatters a window at one point with no apparent movement other than smiling.

Voice: Her mesmerizing voice was not only a sheer talent but also a power that controls, awakens and attracts chiropterans. Her voice also intrigues Saya and drives her to frenzy, awakening her chiropteran mode. When trying to convince Kai to join her, she even manages to mimic Riku's voice.

Physical Transformation: Diva's impersonation of Riku in the latter half of the series demonstrates that she can alter her physical features, though this ability seems limited in comparison to other chiropterans' transformation abilities. She then resumes her default appearance before her duel with Saya at the Metropolitan Opera House, even regaining her long hair. Most likely, Diva also used this power to impersonate the Grand Duchess Anastasia in 1918.

Psychological Overpowering: Diva has a severe psychological effect on her enemies: Hagi's chiropteran hand begins shaking at one point when he senses her presence, during the first half of the series Saya freezes up when she hears Diva's song, Riku is paralyzed with fear when she corners him on the Red Shield HQ (though the explanation in the light novels is that his own chiropteran biology rendered him immobile and unable to resist her), and she intimidates Lewis badly enough during a brief encounter that he sweats and falls down when she steps close to him.

Queens have enhanced speed, strength, and endurance that surpasses those of their chevaliers and other chiropterans. All other chiropterans are born of the blood of Queens, either through the queen's own efforts or human experimentation. Their blood can also crystallize and destroy any chiropteran of any level that was created by their sister queen. Queens are believed to be able to defeat their chevaliers due to their enhanced abilities as shown by Diva when she defeated and nearly killed Solomon after a short time with him having grave injuries while she sustained none whatsoever from the engagement.

The twin Queens are the only dangers for each other as each of them can die by the other's blood. This method of death is only viable if either Queen has become impregnated, a process that would cause the blood to no longer become lethal to the other Queen. As well the possibility of taking out the heart completely from the body and crushing it or beheading could be an effective method as well but due to the Queen's high level of fighting skills this becomes exceedingly difficult as the two tend to be equally matched in all areas of ability. 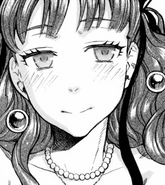 Retrieved from "https://vsbattles.fandom.com/wiki/Diva_(Blood%2B)?oldid=5398852"
Community content is available under CC-BY-SA unless otherwise noted.