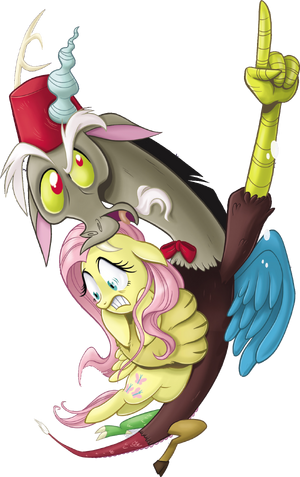 Discord is the mischievous Spirit of Chaos and Disharmony, and a recurring character in the My Little Pony: IDW Comic series. Once a villain to the ponies of Equestria, Discord has since reformed and uses his powers for good and goes on many adventures with the other members of the Mane 6.

Age: At least thousands of years old (Claimed that he's lived at least this long), Possibly far older (Is implied to have had friends since the dinosaur era)

Classification: Draconequus, Spirit of Chaos and Disharmony | Spirit of Order and Harmony

Attack Potency: Universe level+ (Superior to Celestia and Luna, who were stated to have infinite power for destruction and to be able to break worlds. Said worlds have been stated to be entire universes at least four times. His mind is an entire physical dimension that he can reshape and control, which is infinite in size.) | Universe level+ (Reshaped Discord's inner dimension) Can bypass conventional durability with several of his powers.

Speed: Immeasurable (Was able to travel to different points in time with merely his speed) | Nigh-Omnipresent (Exists in the hearts of all who desire order)

Range: Universal (His powers can reach across his entire personal universe), Low Multiversal via portals (His show counterpart tried to banish Treehugger to another dimension using a portal)

Intelligence: Genius (Discord has massive knowledge that extends to all realities, is knowledgeable in physics and even Quantum Physics. Knows that he is a fictional character and is implied to know other series in fiction. Was able to calculate how fast he'd need to go to travel through time)

Weaknesses: Quite overconfident and cocky at times, Discord hates taking orders due to his chaotic nature. | Cannot use all of Discord's powers.

Note: Due to the main series being canon to the IDW series, Discord has all the same abilities as his show counterpart.

Bender (Futurama) Bender's Profile (Bender was 3-A, Speed was Equalized)

Star Butterfly (Star vs. the Forces of Evil) Star's Profile (Discord and Mewberty form Star were used, battle took place in Mewni and speed was equalized)