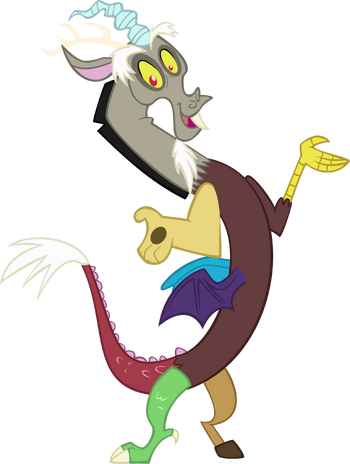 Discord is a recurring character in My Little Pony: Friendship is Magic. He is a Draconequus and spirit of Disharmony who was imprisoned in stone more than a thousand years ago due to the chaos he caused in Equestria. Introduced as the primary antagonist of the Season 2 premiere, Discord later learns the value of friendship and becomes a helpful ally, albeit one often still learning the importance of trust in one's friends. 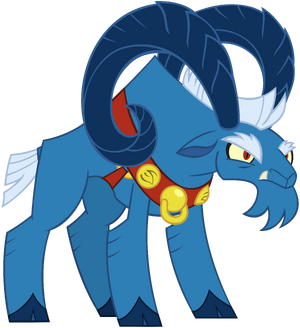 Long before the show's events, Grogar was a treacherous tyrant who took over the land of Equestria, until he was stopped by Gusty the Great, who rid him of his most prominent magic by stripping his bell away from him, banishing him elsewhere.

During season 9 of the show, Discord impersonated Grogar, and gathered Lord Tirek, Queen Chrysalis, Cozy Glow, and King Sombra, under the pretense that they together can ultimately defeat the Mane 6 with their efforts and teamwork combined.

However, in reality, he just wanted Twilight Sparkle to gain more confidence by defeating them, with himself as a safety net if she should need it.

Age: Over 1000 years old (He was around when Celestia and Luna were younger)

Powers and Abilities: Superhuman Physical Characteristics, Immortality (Types 1, 2, and 3, Often dismembers himself with no problems and could think/remain conscious despite being turned to stone), Weapon Mastery/Weapon Creation (Can create weapons for himself and others to use), Social Influencing (Constantly and masterfully manipulates those around him), Natural Weaponry (His hands have claws at the end of them), Empowerment (The Cutie Mark Crusaders getting into a fight and causing chaos is implied to have helped him escape his weakened seal), Regeneration (Mid-High. Regenerated from a cloud of dust), Has enhanced physical senses as well as the ability to sense magical disturbances, Flight, Magic, Physics Manipulation (He has displayed control over his realm such as adding and deleting gravity from it on a whim), Reality Warping, Toon Force, Chaos Manipulation, Non-Physical Interaction (Could affect Sombra's magic during their battle, Was able to grab and hold a piece of magic), Energy Projection (Demonstrated here), Size Manipulation, Shapeshifting, Chain Manipulation (Placed a chain on Tirek to restrain him), Telekinesis, Mind Manipulation, Mind Control, Empathic Manipulation, Morality Manipulation, Body Control, Hair Manipulation (Used his tuft of tail hair to do magic), Teleportation, Pocket Reality Manipulation, Creation, Healing (Healed Spike and Big Mac inbetween warps), Duplication, Power Bestowal (Turned Big Mac into a unicorn, thus granting him magic and telekinesis), Life Manipulation, Fusionism (Can fuse together and defuse things), Possession (Can possess inanimate objects as well), Organic Manipulation, Biological Manipulation, Matter Manipulation, Transmutation, Durability Negation (Can negate durability with several of his powers), Portal Creation, Dimensional Travel (Can teleport to his own realm freely, Can create portals to other dimensions), Disease Manipulation, Elemental Manipulation, Fire Manipulation, Heat Manipulation (Baked a pie with his powers, Made the area around him cold enough to have snow), Earth Manipulation (Created a active volcano), Explosion Manipulation (Made chocolate milk explode), Ice Manipulation (Froze a lake), Magma Manipulation, Weather Manipulation, Adhesive Manipulation (Created a spider web to trap these guards), Animal Manipulation, Gravity Manipulation, Electricity and Smoke Manipulation (Demonstrated here), Plant Manipulation (Grew plants that rapidly spread into Ponyville, Presumably grew numerous hedges to seperate the Mane Six in the labrinth), Time Travel (Took Twilight back in time for not figuring out his riddle), Intangibility (Phased though a brick wall), Existence Erasure (Erased a lake and a dam from existence, Made a plundervine disappear), Dimensional Storage (Constantly pulls objects out of thin air), Power Nullification (Removed Twilight and Rarity's horns, negating their use of magic, also nullfied Starlight's telekinesis on him ), BFR (Able to throw others into alternate universes), Illusion Creation (Showed visions of things, that weren't really happening), Perception Manipulation (Made Rarity see a giant boulder as a diamond), Astral Projection (He could project a ghost form of himself even when his body was banished by Starlight), Spatial Manipulation (Ripped open a tear within the fabric of space merely by using his claws, He can also use the fabric of reality as a shower curtain), Petrification (Can petrify himself and others), Light Manipulation & Darkness Manipulation, Energy Manipulation, Resurrection, and Shockwave Generation (Demonstrated these abilities while disguised as Grogar)), Elasticity, 4th Wall Awareness, Clairvoyance (With Crystal Ball), Resistance to Fire/Heat Manipulation (Has set himself on fire with no issue), Magma Manipulation (Stood in lava without feeling the effects), Power Nullification (Resisted Twilight's attempt to reverse his magic, Was unaffected by the Smooze's ability to nullify magic), and Sleep Manipulation (Wasn't affected by the sleep part of the Stone Sleep spell), Pain Manipulation (Feels no pain despite constantly dismembering himself)

Attack Potency: At least Solar System level, likely Universe level+ (Defeated both Celestia and Luna at once. Stronger than King Sombra. Stated that his power can rip the very fabric of reality, and on another occasion exclaimed that his power can warp all of reality as well. Pinkie Pie with his powers stated that she could transform the entire cosmos.) Can bypass conventional durability with several of his powers.

Speed: At least Massively FTL+ combat and magic speed (Comparable to Princess Luna. Nonchalantly reacted to the Elements of Harmony), potentially far higher (Does all his feats casually)

Lifting Strength: At least Multi-Stellar with telekinesis (Superior to Celestia, who could move multiple stars)

Striking Strength: Unknown (Has never shown actual demonstrations of it)

Range: Interstellar (Superior to Celestia). Low Multiversal via portals (Was going to banish Treehugger into another dimension by using a portal)

Intelligence: Mentally unstable, but a rather clever trickster as he was able to outsmart and deceive the Mane 6

Weaknesses: Can be so overconfident and cocky that he will not go all-out against enemies, and has a tendency to underestimate his opponents (Has been defeated three times due to this; Initially by Celestia and Luna, later by the Mane Six, and most recently by Tirek). If Discord acts or becomes "normal", he starts to fade away from existence as he cannot use his reality warping powers in the process of doing so, but it can be reversed if he experiences something "chaotic".

It has been confirmed that the Sun of Equestria is the same size as our own, despite that it revolves around the Earth.

HIM (The Powerpuff Girls) HIM's Profile

Genie (Disney) Genie's Profile (Both were 4-B, Speed was Equalized, Battle took place in a desert)

Maxwell (Scribblenauts) Maxwell's Profile (Both were 4-B, Speed was Equalized)

Ghost Rider (Marvel Comics) Ghost Rider's Profile (Both were 4-B, Speed was Equalized)

The Snatcher (A Hat in Time) Snatcher's profile (Speed was equalized, and both characters were bloodlusted)