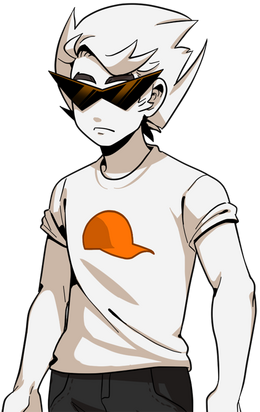 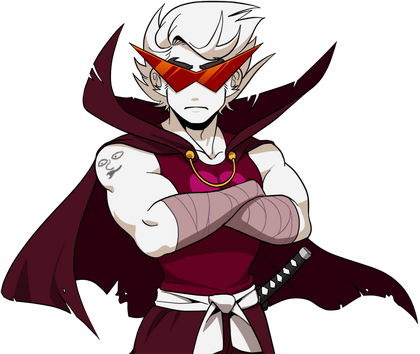 Dirk Strider is the post-scratch incarnation of Dave's Bro. Prior to his proper introduction to the reader, he is referred to by Jane as D. Strider, and later by Roxy as di stri.

Powers and Abilities: Superhuman Physical Characteristics, Weapon Mastery, (He's an expert in swordship and can use FNCYSNTAKIND, which is canonically the deadliest strife specibus), Limited Cosmic and Fourth Wall Awareness Flight with Rocket Board, Summoning, Acausality (Type 1), Dimensional Storage, Master Puppeteer, Afterimage Creation, Resistance to Mind Manipulation (completely unaffected by the Trickster high) and Heat Manipulation | All previous powers to a greater extent, Flight, Immortality (Types 1, 4, and 8; can't truly die if his death isn't "Just" or "Heroic")), Resurrection , Soul Manipulation (can tear the souls out of others and destroy them), is connected to his alternate selves, Sealing | All previous powers to an immensely greater extent, Beyond-Dimensional Existence (Type 2), Large Size (Type 11), Immortality (Types 1, 4, 8, and 10), Non-Corporeal (Ultimate Selves are bodyless persona in the form of Platonic Ideal), Avatar Creation, Reactive Evolution (Adapted his body to the ascencion of his Ultimate Self, something that no other God Tier could do), BFR, Plot Manipulation, Text Manipulation, Mind Manipulation, Conceptual Manipulation, Nigh-Omniscience, Every abilities of his splinters, Resistance to Plot Manipulation, Conceptual Manipulation and Mind Manipulation

Attack Potency: At least Small Building level (Able to cut down Imperial Drones. Should be comparable to Dave and his own Brobot) | Multiverse level+ (He should be comparable to other God Tiers. Comparable to Dave. Fought against possessed Alpha-Session Jack Noir) | Outerverse level (Can match Alt Calliope and The Director, but is a bit weaker. Considered as a bigger threat than Lord English. See the concepts of the Furthest Ring as nothing but an illusion)

Speed: Supersonic+ (He is fast enough to make afterimages and should be comparable to Brobot, who casually sliced a wave of bullets in half) | Immeasurable (Can fly from the Furthest Ring to back inside the Incipisphere. The Furthest Ring transcends Genesis Frogs) | Irrelevant

Intelligence: Genius (Created robots with advanced artificial intelligence and arranged and executed an incredibly convoluted plan while under pressure) | Nigh-Omniscient

Weaknesses: Prone to overconfidence and obnoxiousness. Controlling his alternate selves takes concentration, and if an alternate self is killed or knocked out, he's dazed. Very attached to and unwilling to let go of Lil' Cal. | Has a God Complex, which make him even more overconfident.

Key: Base | God Tier | Ultimate Self