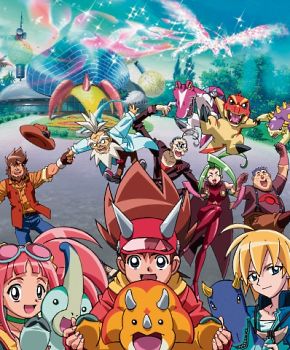 Max Taylor, son of the paleontologist Spike Taylor falls out of bed early one morning and witnessing a meteor fall from the sky sets out with his friends, Rex Owen, and Zoe Drake into the forest where the meteor crashed. There they find the lightning, wind and grass element stones. Chomp, a Triceratops, is accidentally activated when Max rubs its card on the lightning stone. The D-Team meet their new enemies, the Alpha Gang when they come to catch it and are defeated with Terry, their Tyranosaurus. After this, Max and Chomp come, good friends, Rex and Zoe find their own dinosaurs (respectively Ace, the Carnotaurus and Paris, the Parasaurulophus), and the D-Team beside Dr. Taylor and his assistant Reese Drake have now the mission of saving the world and the dinosaurs from the Alpha Gang.

Every Character has Summoning. Dinosaurs are at least wall level in Chibi form. However true form dinosaurs have different strength. The regular ones should be at least be  Multiverse Level by scaling somewhat to the cosmic items of the verse, the Cosmos Stones by utilizing the energy of items comparable to them to fight and evolve into their true forms.. Dr. Ancient stated that if the 7 Cosmos Stones were reunited, they can create enough energy to destroy the universe 10 times, which contains timelines per every point in time. Other people like Seth or the Pterosaur stated that space-time would be wiped out as well. Seth also stated that the entire universe and more would be wiped out. The Dark Pterosaur, made of the 7 Cosmos Stones should also be able to do this.