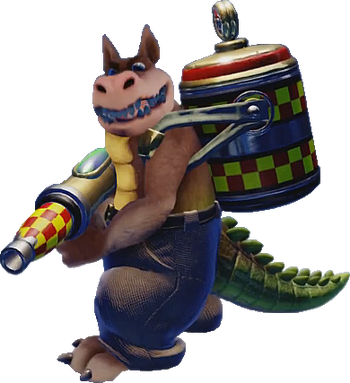 Dingodile is a recurring antagonist in the Crash Bandicoot series who debuted in Crash 3: Warped. He's a genetically modified hybrid of a crocodile and a dingo with an Australian accent who often works with Dr. Neo Cortex in attempting to eliminate the bandicoots. He's a dangerous mutant with a high affinity for fire and takes great pleasure in burning anything or anyone with his signature flamethrower, no matter how weak the victim is. Despite his devious methods, it's revealed that he actually enjoys cooking and reading.

Speed: Supersonic+ (Capable of keeping up and predicting Crash's movements)

Stamina: High (Capable of fighting even after taking several hits from Crash and explosions from his backpack)

Intelligence: He's a skilled marksmen with his flamethrower, often utilizing it in various ways and great precision.

Weaknesses: Attacking him with a solid blow could potentially cause his backpack to react and explode.

Retrieved from "https://vsbattles.fandom.com/wiki/Dingodile?oldid=5676313"
Community content is available under CC-BY-SA unless otherwise noted.