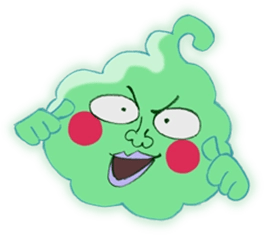 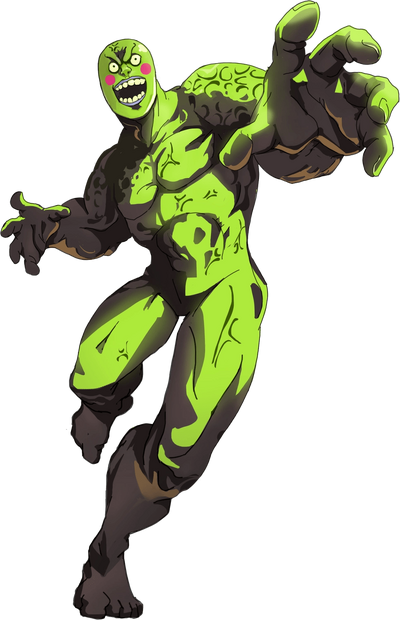 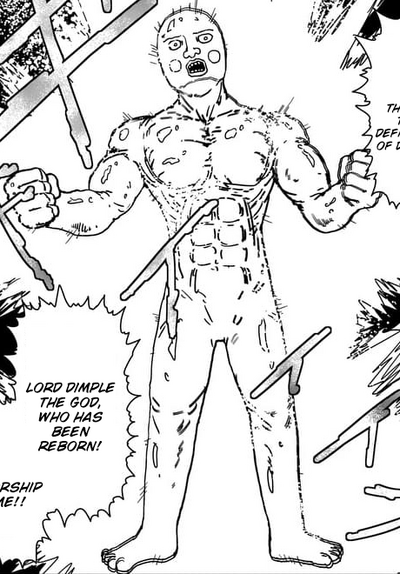 Dimple is an on and off again antagonist and supporting character in the Mob Psycho 100 anime/manga series. He is a spirit whose goal is to become a god through gathering individuals in a cult around himself, a goal which put him at odds with espers such as Keiji Mogami and Shigeo Kageyama on multiple occasions.

However, when he was defeated at the hands of Mob, he followed around the esper to attempt to take over his body. However, he would grow attached to and even become Mob's friend, culminating in a decision to abandon his dream of subjugating the world as worshippers for Mob.

All abilities enhanced to a far greater degree, Forcefield Creation, Through manipulating the Divine Tree/Psycho Helmet he can gain Plant Manipulation, Avatar Creation, Corruption (Type 2. People who touch or consume the Divine Tree are hypnotised into being his cultists), Energy Absorption (Drained Mob and Teru's energy while they were in the Divine Tree)

Attack Potency: Varies depending on who he's possessing and how much power he's expended (Fares poorly even against lesser spirits and espers but can fight off people on the level of Hiroshi Shibata if possessing the right person) | Small Building level+ (A full-power Dimple proved to be more than a match for Mob prior to him going into 100% Mode. Claimed he could easily break through Terada's psychic defenses and destroy his mind, and is considered to be a high-class spirit formerly leading an entire army of them) | At least Large Building level (Set off this explosion. Far stronger than before. Minegeshi was knocked unconscious by interacting with the Divine Tree, and Dimple could overpower Teru with enough time and nearly forced Mob to go 100%), potentially far higher (He was tapping into the power of the Divine Tree, which was created with part of the energy of Toichiro Suzuki's 100% explosion)

Speed: Varies | Subsonic (Kept up with Teru's movements even when weakened, and could easily overpower cadres with his full power) | Subsonic+ (Kept up with Mob properly and could restrain Teru before he could react)

Lifting Strength: Varies | Likely Class 5 (As a high-class spirit, he should rival cadres such as Terada in strength, who can uproot and toss around trees) | At least Class 25 (Mob and Teru couldn't restrain him in this form through telekinesis)

Striking Strength: Varies, could barely fend himself from attacks from other spirits in some bodies but could knock out Hiroshi Shibata while possessing others | Small Building Class+ | Large Building Class (His punches cracked and destroyed large portions of the Divine Tree, and broke through Mob's barriers), potentially far higher

Durability: Varies (Once again he can be one-shot by espers on the level of Teruki Hanazawa but also take hits from cadres and members of the Ultimate Five in some bodies) | Small Building level+ | Large Building level (Erected a forcefield that repelled Mob away from him. Took a number of hits from Mob although was fearful of him entering 100%), potentially far higher

Stamina: Physically tireless. Able to fight and swap through bodies for days on end, and reconstitute himself even when severely weakened. However, inhabiting bodies means he's subjected to that body's physical limits

Range: Standard Melee Range | Dozens of Meters with Wraither Beam and Hypnosis | Several kilometers with Hypnosis and the Divine Tree

Weaknesses: Initially overconfident. Possessing a body means he's subjected to the limits of that body such as physical injury and stamina. Depends on the Divine Tree for much of his powers in his God Form, which turned on him after he abandoned it