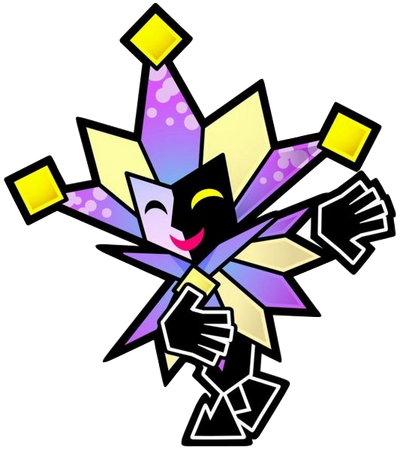 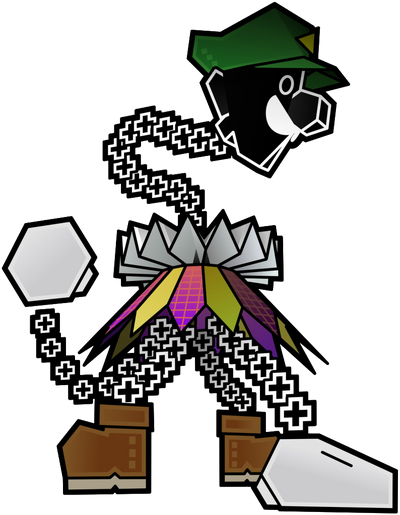 Dimentio is a villain in Super Paper Mario. His name is a pun on dementia and dimension. Like Mario and Mimi, he can flip between dimensions, but he can also manipulate them (an ability he shares with Merloo) and controls Dimension D, which he designed. Skilled in duplication, teleportation, and invisibility, Dimentio is one of the four main minions of Count Bleck, along with O'Chunks, Mimi, and Nastasia. However, over the course of the game, Dimentio rapidly reveals himself to be the true main antagonist, using his 'master' merely as a way to further his plans to obtain the Chaos Heart and use its power for his own agenda.

All previous abilities, All the powers of Luigi, Invulnerability, Fusionism (Fused with Luigi and the Chaos Heart), Space-Time Manipulation, Void Manipulation, Acausality (Type 1, would be unaffected by the destruction of all timelines, including the one he originates from), Self-Sustenance (Types 2 and 3), Creation, Matter Manipulation (Stated he would've recreated all worlds to his own image), Passive Forcefield Creation (Count Bleck can create a forcefield that stays active), Time Manipulation, (Can slow down time), Resistance Negation (Can still harm people with Barry, a Pixl who can create barriers to reflect projectiles or harm opponents), Size Manipulation, Immortality (Types 2 and possibly 5, temporarily lived without his head. If Dimentio destroyed all worlds, The Underwhere will be gone. Meaning if he dies, his soul will not go there to become a Shayde)

Attack Potency: At least Multi-Solar System level (Fought and easily killed Mario, Princess Peach, Bowser, and Luigi), possibly Universe level+ (Dimentio was hinted to be the creator of the Dark Prognosticus, which granted Count Bleck dark powers capable of destroying his universe, and was likely a former member of the Ancients, a tribe that created the Pure Hearts and worlds such as Flipside) | Multiverse level (If Dimentio had not been defeated by Mario, he would have destroyed the totality of all worlds, timelines and possibilities in the Marioverse. Which includes things like the Dream Depot, where the dreams of the citizens are turned into entire universes)

Speed: Massively FTL+ (Outpaced Mario and the gang with complete ease) | Massively FTL+ (As one of the strongest beings in the Marioverse, he should be comparable to Dreamy Bowser)

Durability: At least Multi-Solar System level (Let himself get hit by Mario and an extremely angry Luigi numerous times, casually tanking all of their hits), possibly Universe level+ (Possibly survived the universe being destroyed by Count Bleck) | Multiverse level (Would have survived the destruction of existence that he was going to cause)

Intelligence: Genius, conducted a scheme and manipulated almost everyone around him in order to get the Chaos Heart. He is also hinted to have created the Dark Prognosticus

Discord (My Little Pony) Discord's Profile (Base Dimentio was used, and speed was equalized)