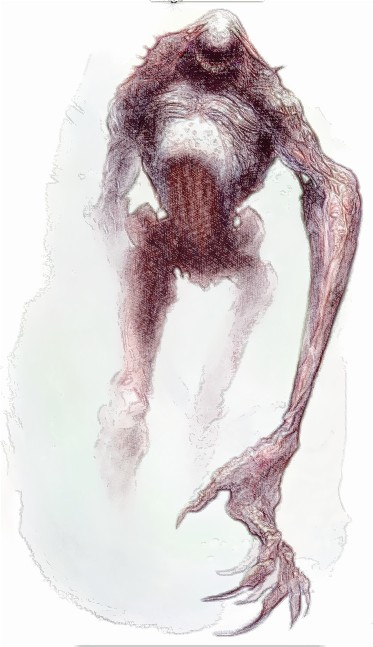 Dimensional Shamblers are mysterious entities originating from a lower level of existence (implied to be 2-dimensional or lower). While they appear as almost humanoid beings with taut, grey skin, lanky arms, strangely mammalian heads, sunken eyes, and jagged teeth, they do not actually have a physical form. Dimensional Shamblers possess an ability to project themselves into higher planes of existence, unable to touch or be touched. While they appear to physically attack prey, they are actually utilizing a unique form of hypnosis, in which the target's will is drained and they sink deeper down towards the Shamblers' level of existence. Once the victim has been lowered to the Shamblers' plane, they will find themselves entirely helpless as the horrific entities devour their very essence.

Because of the nature of their existence, it is seemingly impossible for any other being to directly interact with a Shambler. However, since this effect goes both ways, Shamblers cannot truly attack a being until it has been lowered into their plane. This means that someone with a significantly strong will can resist a Shambler's pull on their mind for long enough to escape, forcing the Shambler to return to its own realm empty handed. However, the more Shamblers that simultaneously use their hypnosis on a single target, the exponentially harder it becomes for said target to resist being sucked down to hellish realm that exists beneath them.

Name: Dimensional Shamblers, "Hunters from beyond"

Classification: Mysterious entities originating from a lower level of existence

Attack Potency: Unknown (While Shamblers are able to affect beings on higher layers of existence than their own, they do not seem to actually "attack" said beings in the traditional sense)

Speed: Varies (A Shambler's "speed" is entirely dependent on what level of existence they are projecting themselves upon)

Durability: Unknown (It is unknown if one can "hurt" or "destroy" a Shambler, as they do not appear to exist in the traditional sense. However, an individual with enough willpower will have a significantly higher chance of ignoring a Shambler's influence)

Stamina: Unknown (If a Shambler fails to pull its prey down to its realm, it will eventually return there, regardless)

Range: Unknown (Shamblers seem to be able to appear in a vast multitude of higher layers of existence)

Intelligence: Unknown. Shamblers appear to function in a rather basic and primal manner, though it is impossible to discern the true level of their intelligence.