VS Battles Wiki
Register
Don't have an account?
Sign In
Advertisement
in: Verse-specific Powers and Abilities, Digimon 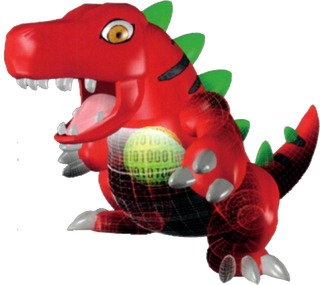 Digimon is the name given to beings, that contains Digicores, usually created by Yggdrasil that inhabit the so-called Digital World. They are beings created with the idea of evolution in mind and so one of their main features is the need to beat an opponent, absorb their data and thereby evolve.

Due to the franchise cosmology, which is inspired by Neoplatonic Emanationism, the data that make up the Digimon are a metaphysical and primordial material from which the matter, mind, and even soul of the lower worlds are mere emanations of what exists in the Digital World. And because of the franchise's theme of equating reality with a computer system, Digimon and other digital beings have a wide range of natural powers that make them powerful.

Holy Power (聖なる力, Seinaru chikara), is the control over the "Light Energy" (光のエネルギー, Hikari no enerugī), also called "Positive Power" (「正」の力, "Sei" no chikara), in the Digimon universe. "Light" is in fact an umbrella term for the "Source of All Life" and is the very essence of Evolution and Goodness that every existing Digimon has and uses.

In reality, every single Digimon in the franchise has some level of "Holy Power", the so-called Holy Digimon (聖なるデジモン, Seinaru Digimon) are simply the ones with high amounts of Holy Power that uses it to destroy darkness and it's part of their duty, but in a way every Digimon has Holy Power. In special the "Virus Buster" Digimon are known having a strong sense of justice to fight "Evil", especially among the "Virus DIgimon" and so their use their "power of justice" to remove this spirit of evil. However this is more related with the fact of most of them being Vaccine Digimon, and is more of a natural instinct for those Digimon to fight against evil viruses. In the end, every Digimon has at least some amount of Holy Power, but some are more likely to have the "Will of Justice" to use it against evil.

Darkside Power (ダークサイドのパワー, Dākusaido no pawā), also called as Power of Darkness (闇の力, Yami no chikara or 暗黒の力, Ankoku no chikara), is the control over Dark Energy, also called Negative Energy. The Darkness itself is the original form of the world, a void of nothingness without time and space, without meaning or existence, from where the world of Digimon was created. Some Digimon are capable of using this power to expand their own darkness, spreading nothingness and erasure over the world.

In reality, every single Digimon in the franchise has some level of Darkside Power, however it's mostly controlled by their "Lightside Power". The Dark Digimon (暗黒デジモン, Ankoku Digimon) are those who are ruled by their "Virus Instinct", and so the most common ones to use this type of power.

Note 1: Digimon began as computer viruses that evolved into self-consciousness. This was the initial planning of the franchise and the first products were made based on this and consequently future products also developed this idea.

However with the production of the anime "Digimon Adventure" the director Hiroyuki Kakudou decided to modify the origin of the Digimon as primordial souls of a higher world who have manifested themselves in our world at many points throughout human history, each time looking different depending on humanity's interpretation and only in the present day are they interpreted as computer viruses.

In essence, the two Digimon explanations exist together with one including the other at a certain level, even though this creates contradictions when all the works are analyzed together.

Note 3: Regarding immortality, many Digimon products, especially Digimon World series games and Virtual Pets, continue to place the main Digimon as having mortality, yet this contradicts the explanations given in anime, manga and other games that Digimon are immortal. This is more of a remnant of the original era of Digimon as well as a gameplay mechanics. Other deaths that appear to have been by age have other explanations regarding problems in the composition of the Digimon code, especially artificially created ones.

Note 4: Due to the interaction between humans and digimon, many Digimon ended up adapting to the common sense of humans which eventually limited some of their powers, for example there are Digimon who believe they need to breathe and therefore cannot dive deep into water or things like this. However, this is merely a limitation regarding the Digimon's cognition in their world, which is controlled by thought, and not a limitation of Digimon physiology itself.

Note 5: The sources and explanations of the content on this page are in this blog.

Note 6: Digimon as abstract beings do not usually interact with physical beings as humans. If it's decided to work the Digimon the way they are usually seen in Real World scenes (With them in ReArised form) the abilities coming from their abstract bodies, as High-Dimensional Existence, should be disregard.

Note 7: Certainly some Digimon have these skills more developed than others and others are more likely to use them than others, so I would like to insert an explanation about Data, Virus, Vaccine and Free to explain this situation.

Note 8: For information of light and darkness in detail, read this blog.